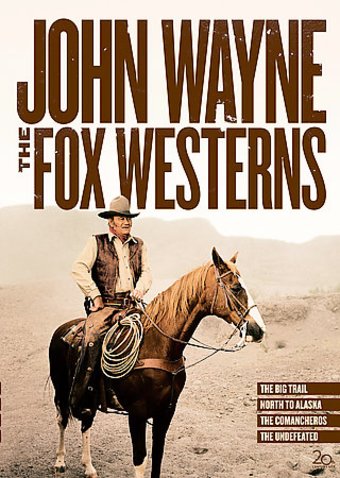 THE BIG TRAIL: Pioneers heading for Oregon endure the hardships of weather, unfriendly strangers and internal strife in this sophisticated early sound film. Featuring John Wayne in his first starring role, this straightforward Western tale is now overshadowed by its place in history as an early example of Fox's widescreen Grandeur process, its naturalistic sound, and prototypical Wayne performance.

NORTH TO ALASKA: A tough Alaskan gold digger (John Wayne) agrees to pick up his partner's (Stewart Granger) fiancee, but winds up bringing back a beautiful substitute instead. With both men vying for her favor, trouble inevitably breaks out between the best friends, exacerbated by a shifty con-man (Ernie Kovacs) hoping to steal the men's gold claim. The Duke is in usual macho form in this entertaining Alaskan adventure, based on the play BIRTHDAY GIFT by Laszlo Fodor.

THE COMANCHEROS: John Wayne is a Texas Ranger in this rollicking, good humored western, assigned to bring an arms-running gang to justice. After Wayne arrests one of the criminals, matters are complicated when they wander into an area controlled by the Comancheros: a group of Anglos aiding the warring Comanche Indians. Based on the novel by Paul I. Wellman, THE COMANCHEROS was the last film for director Michael Curtiz (CASABLANCA).

THE UNDEFEATED: After the Civil War, former Union Colonel John Henry Thomas (John Wayne) and Confederate Colonel James Langdon (Rock Hudson) are leading expeditions to Mexico, where Langdon will establish a new settlement away from Carpetbaggers and Thomas will sell horses. Along the way they must put aside their differences to deal with a threatening Mexican general. THE UNDEFEATED also features Los Angeles Rams stars Merlin Olson.