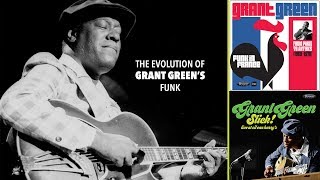 The Evolution of Grant Green's Funk (Funk in France/Slick! Live at Oil Can Harry's) (Music Video)

Recording information: La Maison De La Radio, Studio 104, Paris, France (10/26/1969).
Resonance's Funk in France: From Paris to Antibes (1969-1970) is two archival recordings in one package. Most of the first disc is devoted to an October 26, 1969 concert given at La Maison de la Radio's Studio 104, where Grant Green was supported by bassist Larry Ridley, drummer Don Lamond, and, on "I Wish You Love," guitarist Barney Kessel, while the second part of Funk in France combines four highlights from two July 1970 appearances at the Antibes Jazz Festival. While the two performances were separated by a matter of months, they're quite different in execution. The Paris concert finds Green pushing toward the funky pop-jazz hybrid he'd make his specialty in the early '70s but not quite committing to it just yet. Green doesn't hide his allegiance to funk by opening the proceedings with a percolating version of James Brown's "I Don't Want Nobody to Give Me Nothin' (Open Up the Door and I'll Get It Myself)," a version that doesn't serve as a keynote as much as a harbinger to what came later. Apart from a loosely lyrical "Untitled Blues," Green and company are in relatively straightforward bop territory, playing two Sonny Rollins tunes and the standard "I Wish You Love" along with Antonio Carlos Jobim's "How Insensitive." It's a lively set, but understated when compared to the cooking selections from Antibes. Working with an organist and saxophonist lets Green lean into R&B, and the quartet digs in hard, spending nearly 20 minutes grooving on the original "Upshot," then extending Tommy Tucker's dance hit "Hi-Heel Sneakers" to nearly half an hour. Here, Green is woodshedding the hard jazz-funk he'd debut on Alive!, the landmark Blue Note LP he'd record just a month later, and while the performances on Funk in France are neither as pop-oriented nor hard-charging as the material there, that's also their appeal. Green has his style in place and he has the freedom to jam as long as he desires. The results aren't just mesmerizing, they're danceable. ~ Stephen Thomas Erlewine