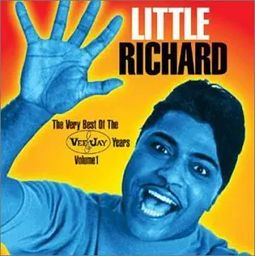 The wild and uncompromising Little Richard refined, defined, and revitalized rock and roll with a string of incredible hits in the '50s. Idolized by many of rock's greatest performers. This disc features the best of the tracks he recorded for Vee-Jay in 1964. H ighlights include "Long Tall Sally", "Slippin' and Slidin'", and "Lucille", and reportedly features session work by Jimi Hendrix.

Digitally remastered by Walter DeVenne.
This is the first of two volumes devoted to the recordings Little Richard made for Vee Jay in the mid-'60s, many of which were re-recordings of his classic Specialty sides. The remakes aren't particularly interesting except for Little Richard's attempts to update them with loud drums and hysterical performances. The newer material veers toward soul rather than rock & roll, but still sounds pretty retro for its time. More noteworthy are the bizarre interpretations of "Memories Are Made of This" (a number one hit for Dean Martin) and Hank Williams' "Why Don't You Love Me." Volume one includes Little Richard's lone Vee Jay hit, the soulful "I Don't Know What You've Got but It's Got Me." ~ Greg Adams