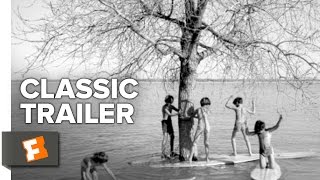 One need not be a surfing fanatic to find something interesting in SURFWISE, Doug Pray's thought-provoking documentary about the legendary and unconventional Paskowitz family. The first family in surfing became famous for its large size, for earning countless trophies, and for its eccentric leader, Dorian "Doc" Paskowitz. Once an admired figure in the medical community, Dorian decided while at the height of his success to leave it all behind, heading for a life on the beach. While traveling the world in search of the next great wave, Dorian met and married Juliette, who shortly began birthing their nine children. Born in quick succession and never placed in school, the kids were raised in the ocean and in an ever-moving camper. Though they seemed unconventional to outsiders, their atypical routine was actually highly controlled by Dorian, who wanted to raise his family the way animals live, free of the material world.

The film takes viewers on a turbulent ride through the family's complex history, first focusing on its patriarch and then slowly moving through the years with commentary by the family's seven now-grown children. Careful never to judge, SURFWISE simply presents the story as experienced by those on the inside. Even at age 85, Dorian appears before the camera outspoken and sure as ever that the extreme way he raised his children was a gift to them. Scenes of complaint by the adult children are countered by a hopeful reunion at the end. Though Pray doesn't break any new filmmaking ground here, he chooses an intriguing subject that, in turn, prompts viewers to leave the film looking at family dynamics, tradition, and personal sacrifice in a new way.

Legendary surfer, Dorian "Doc" Paskowitz, abandoned a successful medical practice to withdraw from the lifestyle of mainstream America. But unlike other American searchers such as Thoreau and Kerouac, Paskowitz took his wife and nine children along for the ride, all eleven of them living in a 24-foot camper. The family spent their days living by Doc's rules on health, fitness, sexuality, and above all surfing. The Paskowitzs' prove that America may be running out of frontiers, but it hasn't run out of frontiersmen.