The Swan Silvertones Singin' In My Soul / Blessed Assurance 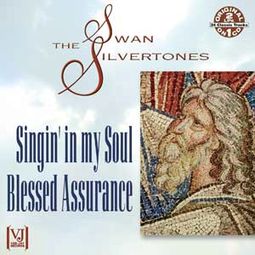 Get email alerts for The Swan Silvertones
Available: Usually ships in 1-3 business days
LOW STOCK:
Only 1 copy left
Add to Cart
Add to Wishlist
Format:  CD
item number:  ZSUR 40288
Related products:
The Soul Stirrers: Joy in My Soul: The Complete Sar Recordings (2-CD) for $13.60
Spirit of Memphis Quartet: Happy in the Service of the Lord (2-CD) for $12.98

These albums, originally released by Vee-Jay in 1960 and 1963, are two of the best albums ever recorded by this premiere gospel vocal group.

2 LPs on 1 CD: SINGIN' IN MY SOUL (1960)/BLESSED ASSURANCE (1963).
Originally released on Vee-Jay.
Drawing from the archives of Vee-Jay Records, Collectables combines the Swan Silvertones' second and fourth albums for that label on this discount-priced two-fer, 1960's Singin' in My Soul and 1963's Blessed Assurance. The renowned group's approach does not change from one album to another; on both, they fervently sing original gospel songs with rocking accompaniment, the harmonies supporting an improvisatory, expressive lead vocal. "Rock My Soul" became a well-known song, but the material is consistently impressive, both in its proclamation of the wonders of Christianity and in the dark warnings against damnation. In particular, "Sinking Sand" is a harrowing confession of uncertainty about life, justifying the need for salvation. Christian or not, music lovers are likely to enjoy the Swan Silvertones' musical religiosity. ~ William Ruhlmann