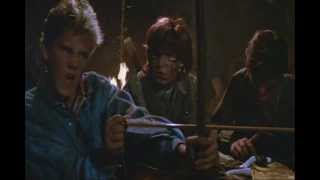 One of the better vampire films about two new-in-town brothers who discover a local gang of motorcycle youths are more undead than alive. Younger brother Sam (Corey Haim) works hard to eradicate the ghoulies but his older brother (Jason Patric) falls in love with the bunch's lone female (Jami Gertz). Soon, he finds that he's gradually becoming a vampire himself. An interesting candy-coated meditation on teen conformity with a great rock soundtrack.

When newly-divorced Lucy moves her sons to her father's house in Santa Clara, California -- "the murder capital of the world" -- her teenage son, Michael, quickly falls in with the town's bad kids: a bike-riding, Jim Morrison-worshipping gang of blood-sucking vampires. Her younger son Sam and his buddies, the Frog brothers, are the only ones who recognize the signs of vampirism in Michael, and they plot to battle the legions of the night before they take over the entire town.