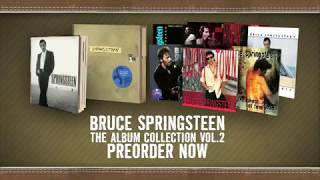 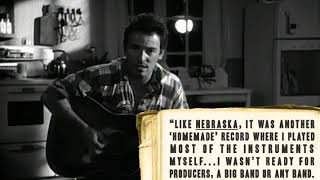 Appearing nearly four years after its predecessor, The Album Collection: 1987-1996, Vol. 2 chronicles Bruce Springsteen's difficult middle age, an era that began with 1987's Tunnel of Love and ended in 1995, when the release of the haunting The Ghost of Tom Joad was complicated by the first stirrings of the reunion of the E Street Band. Springsteen left the E Street Band behind once he put the Born in the U.S.A. tour in the history books. The blockbuster success of Born in the U.S.A. felt like a culmination of everything he worked toward in the previous decade, but he found himself at loose ends, not helped by shifts in his personal life: his brother-in-arms Steven Van Zandt left the E Street Band as Born started its ascendancy, while his 1985 marriage to Julianne Phillips quickly curdled. Springsteen swiftly found a lasting love in Patti Scialfa -- the pair married in 1991, just two years after his divorce from Phillips -- but it still took Bruce a long time to find his artistic footing, and those years in the wilderness are chronicled on The Album Collection: 1987-1996, Vol. 2.
Between 1987 and 1995, Springsteen only released four studio albums -- Tunnel of Love, the twin records Human Touch and Lucky Town, and The Ghost of Tom Joad -- which means this box is buttressed by the 1993 live set In Concert/MTV Plugged and two EPs, 1988's Chimes of Freedom and 1996's Blood Brothers. Adding this ephemera accentuates the essential yearning fueling this era of Springsteen, illustrating how he wasn't quite sure how to move forward. Tunnel of Love is the masterpiece of this era, a record that is by some measures his most candid. It's so good, it seems like it would belong with the group of albums captured on the first Album Collection -- the final undisputed great record from Springsteen -- but its essential unease opens the door to years when Bruce wasn't comfortable being the Boss.
Nowhere is that truer than Human Touch, an album constructed like a big early-'90s blockbuster that was immediately undercut by the simultaneous release of Lucky Town, a record that remains ragged underneath its polish. The 1993 In Concert -- which was the first official Springsteen album to capture a concert in its entirety -- opens with the cheerfully ribald "Red Headed Woman," a tip of the hat to Scialfa that also signals how he was starting to right himself, to bring his different sides into balance. The Ghost of Tom Joad, often compared to the stark Nebraska, isn't quite austere, but it does show how Springsteen was striving to reconnect with the muse that powered him through his glory days, so it serves as an unlikely cousin to the Blood Brothers EP, where he starts to rev up the E Street Band again.
The Album Collection: 1987-1996, Vol. 2, like its predecessor, contains albums remastered via the Plangent Process, and the audio is as full and rich as its companion; where the '70s albums were given muscle by remastering, these '80s and '90s records are stripped of their digital brightness and seem warmer and fuller. If the decision to make Tunnel of Love, Human Touch, and In Concert into double LPs means they're slightly cumbersome listens, they nevertheless sound wonderful, and that's the ultimate reason for acquiring this box: these records have never sounded -- or have been presented -- better than they are here. ~ Stephen Thomas Erlewine