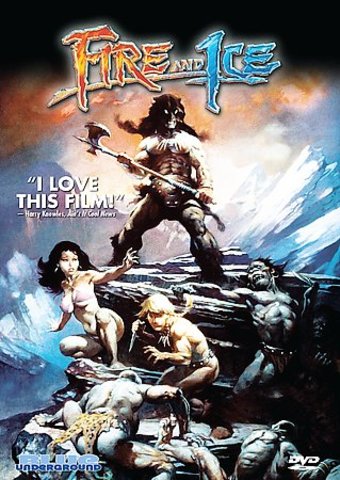 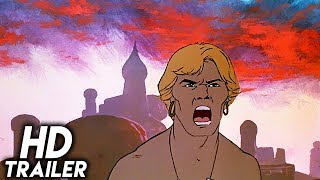 Celebrated sword-and-sorcery artist Frank Frazetta teams up with animation director Ralph Bakshi for this high-energy animated fantasy. It's a prehistoric battle of the elements as the dissolute ruler of the Ice World, Nekron (Sean Hannon), starts a war against the fire people using a massive, advancing glacier and armies of subhuman monsters as his weapons. When he arranges to have the fire king's shapely daughter, Teegra (Cynthia Lenke), kidnapped, the adventure begins as she escapes her captors and hooks up with Lorn (Randy Norton), lone survivor of an earlier skirmish. With the aid of a mysterious dark warrior (based on Frazetta's famous painting "The Death Dealer"), Lorn and Teegra fight the armies of Nekron as well as giant monsters, lesbian sorcerers, and other comic book delights. A thunderous classical score by William Kraft adds excitement to this violent, sexy, fast-moving film. It also benefits from unusual animation techniques that nicely complement the far-out imaginations of Frazetta, Bakshi, and screenwriters Roy Thomas and Gerry Conway.

It began as a once-in-a-lifetime collaboration between two of the greatest icons of the fantasy genre: Controversial animator Ralph Bakshi (director of FRITZ THE CAT, WIZARDS and the original THE LORD OF THE RINGS) and legendary illustrator Frank Frazetta (creator of the iconic CONAN THE BARBARIAN, VAMPIRELLA and Edgar Rice Burroughs book covers). It became - and remains - one of the most startling animation epics of all time. Now experience a world unlike any ever seen, where savage warriors, horrific monsters and luscious maidens battle for the soul of a civilization in a time of good and evil, pleasure and pain, and FIRE & ICE.

FIRE AND ICE is an animated adventure film created by director Ralph Bakshi and fantasy illustrator Frank Frazetta in which a jungle hero saves a beautiful princess from the clutches of the Creatures of the Ice.

Grave of the Fireflies (DVD)
$15.70 Super Savings
Add to Cart