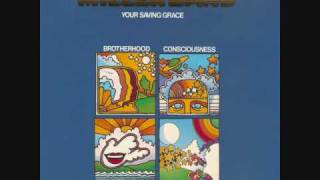 Steve Miller Band: Steve Miller (vocals, guitar, harmonica); Lonnie Turner (bass, vocals); Ben Sidran, Nicky Hopkins (keyboards); Tim Davis (drums, vocals).
Recorded at Heider Studios, San Francisco, California.
YOUR SAVING GRACE was released in 1969 only months after the groundbreaking BRAVE NEW WORLD. It's something of a retrenchment for the Steve Miller Band, ditching the experimental leanings of their first three albums once and for all. What's left sounds like the prototype for the mid-'70s albums that would finally make Miller a world-famous and wealthy man. Miller's characteristic blend of slide guitar, barrelhouse piano, and futuristic synthesizers is already in place, and songs like "Baby's House" and the loose, funky pop of "Little Girl" sound like dry runs for later hits like "Rock'n Me" and "Fly Like An Eagle." In these surroundings, only "Motherless Children," a reworking of a blues standard, and the forceful "Don't Let Nobody Turn You Around" recall the bluesier, heavier sound of Miller's early albums. YOUR SAVING GRACE, complete with a quintessential '60s cover proclaiming the virtues of peace and brotherhood, is a transitional album, but its virtues make it worth a listen.

Steve Miller Band
Recall the Beginning... A Journey from Eden
$23.10
Add to Cart

Steve Miller Band
Children Of The Future
$23.50
Add to Cart