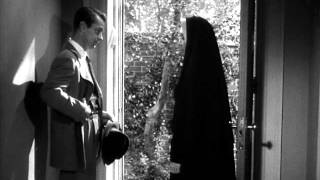 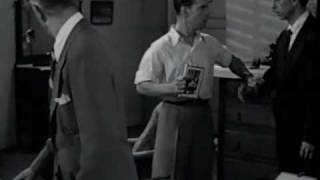 Al Goddard, (Alan Ladd) special investigator for the U.S. post office, is assigned to collar two criminals who've murdered a postal detective. Goddard must first locate the only witness to the crime, attractive young nun, Sister Augustine (Phyllis Calvert). Posing as a crook, Goddard gains the confidence of the murderers' boss Earl Boettiger (Paul Stewart), who has worked out a scheme to defraud the post office of one million dollars. Once they've tumbled to the deception, the crooks take Goddard and the nun prisoner, leading to a fight to the finish in a lonely industrial district. APPOINTMENT WITH DANGER tends to draw chuckles rather than shivers nowadays, thanks to the casting of future DRAGNET co-stars Jack Webb and Harry Morgan as the murderers -- and as icing to the cake, viewers are treated to a scene in which Webb bumps off Morgan! As a whole, the film, the last of Alan Ladd's series of film noir, is uneven and generally unsuccessful. However, it contains some crisp, tough dialogue and some terrific action sequences which make it worthwhile.