Time of your life, Huh Kid. 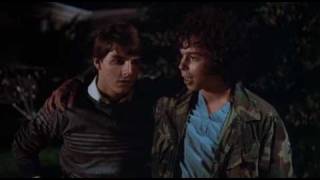 Joel Goodson (Tom Cruise, in one of his earliest roles) is an average high school senior, apprehensive about starting college, especially with his average test scores. He decides to spice up his last high school summer by taking advantage of his parents being away and throwing a non-stop party. The next thing he knows his house becomes the local brothel thanks to the kind hooker played by Rebecca DeMornay and everything turns out differently from what he planned.

Joel Goodson is the type of teenager who makes his parents proud: he's nice, handsome, intelligent, and even principled. But when Joel's parents leave town for a few days, a series of events occur that will change Joel's sheltered life. For starters, he meets Lana, a hooker who proceeds to deflower our young hero, and then suggests he turn his home into a house of prostitution for one evening. Joel agrees, and just as sexy hookers and randy guys turn Joel's house upside down, a representative from Princeton University arrives, to interview Joel! How Joel handles this and other crises (losing his dad's Porsche, the loss of all his furniture, falling in love with a prostitute) will alter Joel's life forever.

The Girl Next Door (Unrated)
$5.80 Super Savings
Add to Cart