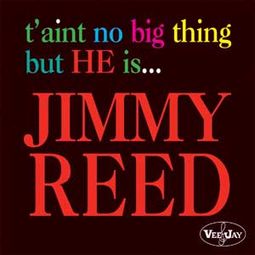 A collection of some of Reed's most accessible and exciting tracks, including "Baby's So Sweet", "Up Tight", and "I'm Trying To Please You".

Includes liner notes by Pete Wielding.
All tracks have been digitally remastered.
Personnel: Jimmy Reed (vocals, guitar, harmonica).
"Shame Shame" is only the tip of the iceberg on this hard-rocking blues classic, which ought to be in the collection of every serious fan of the early Rolling Stones, the Pretty Things etc. By the time he went into the studio in 1963 to record the 11 songs that would make up this album, Jimmy Reed had deteriorated a bit in health since his classic '50s sides -- that's obvious from his voice, which sounds more dissolute than it did on his classic early sides. But that's not necessarily a bad thing, given the nature of his repertory and sound -- the guitars, mostly played by Eddie Taylor with some contributions (most notably on "Shame Shame," as well as two other songs) from Lefty Bates, do sort of dominate, along with Reed's harp and his own guitar playing. And the voice is still expressive, if kind of a little scarily deteriorated in quality at this point. His harp playing was also still interesting to hear, if not quite as free ranging in its sound, or as dexterous as it had been on his first few albums. Jimmy Reed, Jr., who was beginning to get featured with the elder Reed at the latter's concerts, handled the bass chores on three of the songs. ~ Bruce Eder