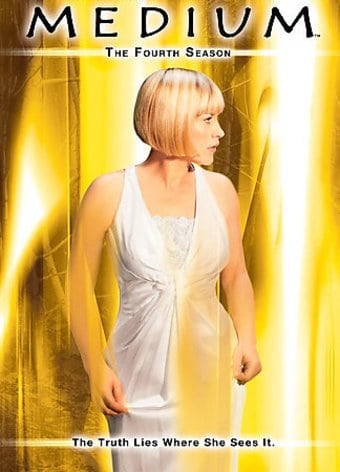 Based on the book DON'T KISS THEM GOODBYE by real-life psychic investigator Allison DuBois, NBC's popular television series MEDIUM blends crime-drama with the supernatural for a smart and chilling spin on the detective genre. Patricia Arquette (TRUE ROMANCE, STIGMATA) stars as a fictionalized version of DuBois, a family woman and aspiring lawyer who has been haunted all her life by strange visions and dreams. When she realizes she has the capacity to communicate with the dead, Allison puts her unique skills to work for a sympathetic district attorney (Miguel Sandoval) while depending on her husband (Jake Weber) and two daughters (Sofia Vassilieva and Maria Lark) for moral support. In this fourth season, Allison's extraordinary powers are revealed to the public, causing catastrophic repercussions for herself and her family. Meanwhile, Anjelica Huston (PRIZZI'S HONOR) guest stars as a private investigator who makes a strange deal with Allison in exchange for her skills.