One brave act and the spell is broken! Charles Laughton (as the ghost), Robert Young and Margaret O'Brien conjure peals of merry laughter out of an exuberant, ingenious comedy based on an Oscar Wilde tale and cleverly directed by Jules Dassin. 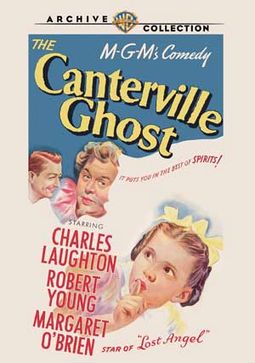 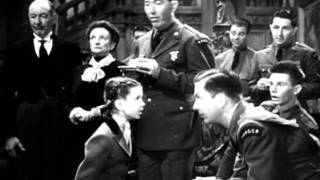 One brave act and the spell is broken! The specter of Sir Simon de Canterville has haunted Canterville Castle for 300 years, ever since he was walled up alive for cowardice. A daring deed by a kinsman will free his spirit. Unfortunately, the Cantervilles are a timorous lot and Simon is out of luck. Then World War II GIs are billeted at the castle and among them is Canterville descendent Cuffy Williams. But could Cuffy be cursed with the family lily liver?

Charles Laughton (as the ghost), Robert Young (as Cuffy) and Margaret O'Brien (as the castle's six-year-old current owner) conjure peals of merry laughter out of an exuberant, ingenious comedy based on an Oscar Wilde tale and cleverly directed by Jules Dassin (Rififi, Topkapi).

In Jule Dassin's adaptation of Oscar Wild's THE CANTERVILLE GHOST, a group of American soldiers waiting to fight in World War II are billeted in Canterville Castle. They are amused when Lady de Canterville, their hostess, instead of being the expected dowager, turns out to be seven-year-old Jessica (Margaret O'Brien). They are also amused to discover that the house is haunted. When Jessica's ancestor, Simon de Canterville (Charles Laughton), ran away from a duel, he was walled up in an alcove, his ghost doomed to roam the corridors of the ancestral home. The soldiers refuse to be intimidated by the ghost. Then, one of them, Cuffy Williams (Robert Young), discovers that he too is a de Canterville, and Jessica thinks he might be able to save the family honor.

In 1887, Oscar Wilde wrote his story about the Canterville ghost, telling of an American family who annoy the ghost by refusing to believe in him. In updating the setting of the tale to wartime Britain, screenwriter Edwin Harvey Blum and director Jules Dassin radically rework Wilde's story. The result is an amusing tale, with Margaret O'Brien as the grave young heroine, Young as the charming American struggling with the Canterville curse, and Laughton having a great time as the weary ghost.

The Canterville Ghost
$19.80
Add to Cart

Customer Rating:
Based on 3597 ratings.


I remember growing up with this one, always playing on The Late Show or Late, Late Show around Halloween. Laughton is hammy, a bit over the top, but effective, as always. O'Brien played her cute English kid to the max, playing well to Young's Army Ranger character. Also of note, Universal's favorite English maid, Una O'Connor appears as, what else? A maid. I believe it's also Peter Lawford's debut, with a bit part in the very beginning. A favorite, even though the special effects aren't very effective.