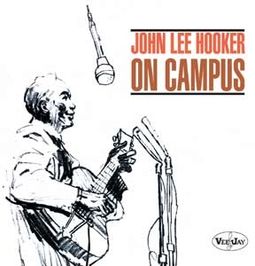 All the songs on this collection were composed by Hooker; included are "Bottle Up And Go", "Birmingham Blues", "My Grinding Mill" and more.

Personnel includes: John Lee Hooker (vocals, guitar).
Includes original liner notes.
Originally released on Vee-Jay in 1964.
All tracks have been digitally remastered.
Vee Jay's 1964 album John Lee Hooker on Campus is titled to sound like a live recording but it isn't. As part of the Collectables Vee Jay reissue campaign, these 12 tracks originally tried to capitalize on Hooker's emergence on the coffeehouse/college tours he was involved in at the time. This is an electric album that contains excellent material from Hooker, even though the occasional background singers get in the way, attempting to modernize his gritty blues with a smoother soul sound. All of the Vee Jay reissues of John Lee Hooker material are worth having and are budget priced as a bonus. ~ Al Campbell