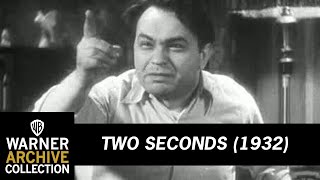 It's been said that your whole life unfolds before your eyes during your last, fleeting moments of existence. Not so for convicted murderer John Allen. After he's strapped into the electric chair and the switch is thrown that sends the fatal current through his body, he - and the movie audience - sees the chain of events that turned Allen from amiable high-rise construction worker to brutal killer.

Similar in theme to Ambrose Bierce's classic story "AN OCCURRENCE AT OWL CREEK BRIDGE," this odd melodrama chronicles the last moments in the life of a man about to be executed in the electric chair, at a maximum security prison loosely modeled on Sing Sing. In the two seconds that it takes for the executioner to pull the switch, convicted murderer John Allen (Edward G. Robinson) flashes back over his life, and the incidents that led him to this tragic state; that flashback forms the bulk of the picture. Allen claims that he is indeed guilty and deserves to die -- though not for the murder of which he is accused. It seems he was an ironworker, and befriended Bud Clark (Preston S. Foster) on the job, who was far more outgoing, optimistic, and well-adjusted than he. One night Allen got drunk, and instantly married Shirley Day (Vivienne Osborne), a woman he met at a dance hall club; meanwhile, Clark discovered the woman's ongoing affair with the club owner, Tony (J. Carrol Naish) and tried to warn Allen. Disinclined to believe this story, Allen punched him in a bitter rage while the men were stationed atop a high structure, knocking Clark off and sending him to his death. Allen then won a great deal of money at the track and used it to repay Tony, from whom Shirley had borrowed cash for food and rent. In the process, however, he discovered the two together and shot and killed Shirley in response to her infidelity. Thus, though he was actually incarcerated and sentenced to death for mariticide, he claims he should be exonerated for this and instead held guilty for the murder of Clark, who didn't deserve to die. This film didn't fare well with critics or viewers, who were used to seeing Robinson play the heavy in action-laden films. It thus quickly faded from view and has never been issued on video, though it occasionally turns up on cable. It packs in a thoroughly bizarre twist in its final act that will not be disclosed here.

Death | Infidelity | Crime
This product is made-on-demand by the manufacturer using DVD-R recordable media. Almost all DVD players can play DVD-Rs (except for some older models made before 2000) - please consult your owner's manual for formats compatible with your player. These DVD-Rs may not play on all computers or DVD player/recorders. To address this, the manufacturer recommends viewing this product on a DVD player that does not have recording capability.