Out of the Fog
Warner Archive Collection (series)

Working-class dreamers Jonah and Olaf fish the Brooklyn waters and ponder their glorious plan: buy a big boat and head for sunny Cuba. Then an amoral gangster puts the squeeze on the few bucks they've saved and puts the moves on Jonah's daughter. 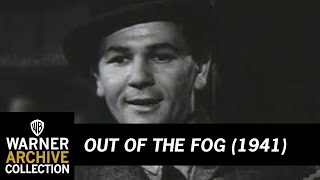 Out of The Fog (Original Theatrical Trailer)

Garfield inhabits his role with the amiable cruelty of a top rodent in a rat-eat-rat world, dominating this early-noir gem based on an Irwin Shaw play originally produced by Garfield's Group Theatre colleagues. On screen it's polished diamond hard by trenchant performances, Anatole Litvak's sure-handed direction and moody cinematography by the great James Wong Howe.

OUT OF THE FOG is the film version of the Irwin Shaw play The Gentle People, refashioned to mollify the Hollywood censors by expert wordsmiths Robert Rossen, Jerry Wald, and Richard Macaulay. Humphrey Bogart lobbied strenuously to play the leading role of charming but ruthless waterfront loan shark Harold Goff, but in the end Warners chose the more "bankable" John Garfield. The terror of Sheepshead Bay in Brooklyn, Goff is able to extort five dollars per week from people like tailor Jonah Goodwin (Thomas Mitchell) and short-order cook Olaf Johnson (John Qualen), knowing full well that his victims are too good-hearted to fight back. Making matters worse for Goodwin is the fact that his restless daughter, Stella (Ida Lupino), seeking to escape her humdrum existence, has fallen in love with the fascinating Goff, leaving her mild-mannered sweetheart George Watkins (Eddie Albert) in the cold. The Irwin Shaw play was a symbolic plea for a united front against European fascism, suggesting that the only way that dictatorial bullies like Goff can be destroyed is for good men to forget such edicts as "turn the other cheek" and "love thy neighbors." Originally, The Gentle People ended with Jonah and Olaf, pushed to the brink when Goff seduces Stella and then demands all their money, conspiring to murder the villain-and getting away with it. Hollywood's Hays Office, however, would never approve of an unpunished murder, no matter what the justification, so the screenplay contrives to have Goff killed by accident. This still doesn't resolve the moral guilt suffered by the two elderly conspirators, so the screenplay takes several dizzying twists and turns before it can arrive at a censor-proof happy ending. Atmospherically photographed by James Wong Howe, OUT OF THE FOG was film noir before the term was even invented.

Death | Terrorism | Crime | Revenge | Terrorists | Love | Criminals | Boats
This product is made-on-demand by the manufacturer using DVD-R recordable media. Almost all DVD players can play DVD-Rs (except for some older models made before 2000) - please consult your owner's manual for formats compatible with your player. These DVD-Rs may not play on all computers or DVD player/recorders. To address this, the manufacturer recommends viewing this product on a DVD player that does not have recording capability.