William Powell's romantic, comic and mystery talents are on display in four films from his 1931-34 tenure at Warner. 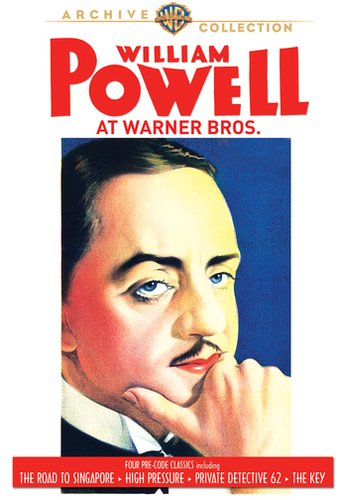 When William Powell signed with Warner Bros., he did more than find a new studio home for his urbane sophistication -- it was there he solidified himself as a leading man. Culled from the nine 1931-34 films Powell made at Warner, these four films variously draw on the star's renowned romantic, comic and sleuthing talents.

The Road to Singapore (1931)
The roving eye of boozing playboy Powell settles on a blonde (Doris Kenyon) disenchanted with her neglectful husband (Louis Calhern).

High Pressure (1931)
Powell's roguish wit is in high gear as he plays a garrulous promoter selling investors on a scheme to make ersatz rubber.

The Key (1934)
In volatile 1920 Dublin, British officer Powell sacrifices his freedom for the woman he loves (Edna Best) and her political-captive husband (Colin Clive).