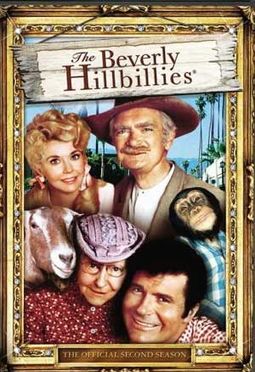 Sit a spell and enjoy the country charm and humorous appeal of the Clampett clan, stars of the highest-rated half-hour show in TV history. Created by TV maverick Paul Henning (PETTICOAT JUNCTION, THE GEORGE BURNS & GRACIE ALLEN SHOW) and premiering in 1962, the show followed the family from Ozark poverty to Beverly Hills, California, after they struck "black gold" on their swampland farm. With their 36-room mansion overrun with Elly May's animals and Granny's illegal moonshine, while girl-crazy Cousin Jethro and Uncle Jed try to keep an eye on them all, this family ain't like the neighbors, but they sure are a lot of fun! This collection presents the series' complete second season.

An instant hit, the rural comedy was the ultimate fish-out-of-water story. The Clampett family strikes it rich in oil and move from their mountain cabin in the Ozark Mountains to the upscale neighborhood of Beverly Hills. Each hilarious episode revolves around the culture clash between the "uncivilized" Clampetts and the "civilized" culture of their elitist neighbors.
Source - Paramount Home Entertainment

Down and Out in Beverly Hills
$5.80 Super Savings
Add to Cart