In the first of three films together and under W.S. Van Dyke's evenhanded direction, Spencer Tracy and Hedy Lamarr bring gravity and elegance, grit and glamour to a poignant melodrama that explores the conflicted yearnings of the human heart. 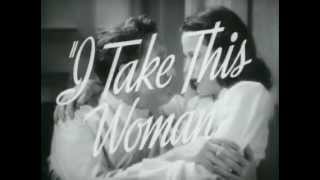 I Take This Woman - (Original Trailer).flv

Dr. Karl Decker is devoted to the poor patients who fill his East Side clinic... until he saves Georgi Gragore from flinging herself into the sea. He falls in love with the well-bred beauty, and takes up an unfulfilling practice among Manhattan's elite to support her in style. Georgi is grateful for his sacrifice and his love - but can't help longing for the man whose betrayal drove her to attempt suicide. In the first of three films they made together and under W.S. Van Dyke's evenhanded direction, Spencer Tracy and Hedy Lamarr bring gravity and elegance, grit and glamour to a poignant melodrama that explores the conflicted yearnings of the human heart.

This soapy drama stars Hedy Lamarr as a would be model who meets a research doctor en route to the US from Europe. They meet when Dr. Spencer Tracy prevents her from taking a suicidal plunge from the upper decks of the ocean liner. It seems that Lamarr had been involved with married man Kent Taylor. When he reneged on his promise to divorce his wife Mona Barrie, she decided to end it all. Finding her extraordinarily beautiful, the doctor suggests she join him in his research. The two end up at a slum clinic and it doesn't take long for the doctor to fall completely in love with her. He convinces her to marry him and soon after the wedding, he exchanges life in the clinic for an upscale practice uptown. Servicing the rich is lucrative and soon he has provided his high maintenance wife with a luxurious life. Unfortunately for him, she appreciates his work and sacrifices not a whit, and as soon as she can attempts to respark a romance with Taylor whom she has never stopped loving. Fortunately for the doctor, Lamarr eventually comes to her senses and marital bliss ensues. This film had a troubled history with all of it due to Louis B. Mayer's obsession with making Lamarr the brightest star in the MGM galaxy. Originally the film was directed by Joseph von Sternberg, but he grew frustrated and tired by Mayer's constant interference and quit the film as did the next director, Frank Borzage. As a result an enormous amount of footage was discarded. Finally reliable W.S. Van Dyke was placed on the production and it was completed. Unfortunately, despite all that effort, the film bombed at the box office.

Romance | Affairs | Models | Love
This product is made-on-demand by the manufacturer using DVD-R recordable media. Almost all DVD players can play DVD-Rs (except for some older models made before 2000) - please consult your owner's manual for formats compatible with your player. These DVD-Rs may not play on all computers or DVD player/recorders. To address this, the manufacturer recommends viewing this product on a DVD player that does not have recording capability.