Trapped on a Train of Terror! 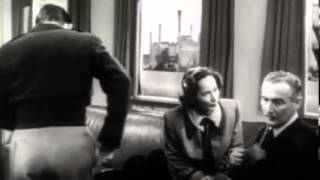 Board the Berlin Express and speed into danger, mystery and intrigue! Four postwar heroes - a veritable United Nations from Britain, France, Russia and the U.S. - battle a cadre of diehard Nazis to rescue an anti-fascist German statesman in this tense espionage thriller starring Robert Ryan, Merle Oberon and Paul Lukas. The setting is as riveting as the action: Berlin Express was the first American movie filmed in post-World War II Germany. Director Jacques Tourneur (Cat People, Out of the Past) and cinematographer Lucien Ballard (The Wild Bunch) capture the ruin of a bombed and devastated nation that just a few years earlier threatened to rule the world.

En route to an important conference on the future of post-World War II Germany, Dr. Bernhardt, a German diplomat, is kidnapped by die-hard Nazi operatives. A multinational team of intelligence officers cooperates to locate the missing man in Frankurt's underworld and bombed-out buildings.

En route to an important conference on the future of post-World War II Germany, Dr. Bernhardt, a German diplomat, is kidnapped by Nazi operatives. A multinational team of intelligence officers is called in to locate the missing man in the seedy underworld and bombed-out buildings of Frankfurt.

Hot
Legend Of Zelda: Sing For The Unicorn TOP 10 Bestseller
$2.99 Out of Stock
Save for Later
(4)