A Small Town on the Outskirts of Greatness. 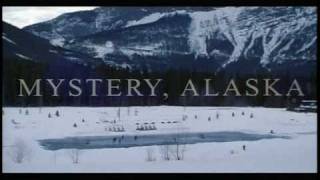 When former resident Charles Danner (Azaria) writes a Sports Illustrated article exposing the "Saturday Game," the town of Mystery, Alaska is turned upside down. The game, a Mystery tradition, consists of locals, young and old, who gather weekly on a pond to play a serious game of hockey. A sports network sees big bucks in setting up an exhibition game between the Alaskans and the New York Rangers. Coming from mega-writer/producer Kelley and co-screenwriter O'Byrne, the film plays like a quirky blend of NORTHERN EXPOSURE and SLAPSHOT.

Mystery, Alaska
With Russell Crowe (THE INSIDER, A BEAUTIFUL MIND), Hank Azaria (GODZILLA, THE BIRD CAGE), and Burt Reynolds leading an incredible all-star cast, here's a fun, uplifting, action-packed story that everyone will love! A remote hockey-obsessed town populated by 633 of the most eccentric characters you'd ever want to meet, Mystery is the kind of place where nothing ever changes. But then life as they know it gets turned completely upside down! When a publicity stunt brings the world-famous New York Rangers -- and the national spotlight -- to Mystery for a game with the local team of weekend warriors, the whole town rises to meet the challenge of a lifetime! Also starring Mary McCormack (TRUE CRIME, DEEP IMPACT) and Lolita Davidovich (PLAY IT TO THE BONE, JUNGLE 2 JUNGLE) in another critical favorite from the hit-making director of AUSTIN POWERS 1&2 -- you'll stand and cheer as this ragtag bunch shows that nothing can melt their dreams of a miracle on ice!