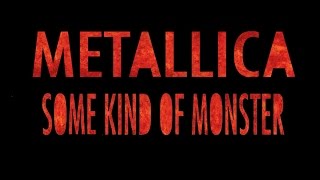 Directed by Joe Berlinger and Bruce Sinofsky, SOME KIND OF MONSTER takes a shockingly in-depth look at Metallica, one of the world's most popular heavy metal bands. The documentary begins in 2001, just after longtime bassist Jason Newsted leaves the group. Surprised by this sudden departure, the remaining band members, particularly singer/guitarist James Hetfield and drummer Lars Ulrich, struggle to record an album without a permanent bass player, a situation that reopens many old wounds, including the loss of Newsted's predecessor, Cliff Burton, who died in a 1986 bus accident. The group even decides to hire a therapist, leading to a series of incredibly emotional confrontations and revelations.

Berlinger and Sinofsky's movie is unquestionably one of the most revealing rock documentaries ever made. Given almost unlimited access to tape the band during a crisis period of nearly three years, the filmmakers capture the members of Metallica both together and individually in remarkably intimate detail. Although the film features Metallica's music and includes vintage footage of the band's early days, it primarily focuses on the difficulties involved with recording the 2003 album ST. ANGER. The end result is not so much a film about Metallica, but a dramatic (and occasionally funny) portrait of a long-running band attempting to understand itself.

Sex Pistols
The Filth and the Fury
$3.98 on Sale
Add to Cart

It Might Get Loud
$12.60 Super Savings
Add to Cart

Metallica
Through the Never
$18 Super Savings
Add to Cart

16%off
Get Thrashed: The Story of Thrash Metal
$12.50 Super Savings
Add to Cart

Metallica
Master Of Puppets
$19.95 on Sale
Add to Cart

Metallica
Under The Covers
$15.40
Add to Cart