An Italian opera singer in New York falls in love with the doctor who cures his laryngitis. 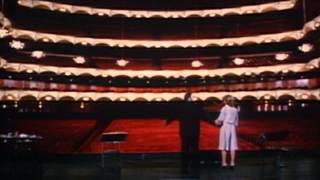 There's no mistaking the grand voice, the outsized personality, the friendly, open face. Stepping outside his traditional operatic canon to star in his only feature film is renowned tenor Luciano Pavarotti.

Not that the "King of the High Cs" steps too far outside with this breezy tale of romance. Nor would fans want things any other way. The role of an opera star touring the U.S. provides an ample showcase for Pavarotti's rich vocal artistry in works including Ave Maria, La Donna È Mobile, his signature Nessun Dorma, even I Left My Heart in San Francisco. Franklin J. Schaffner (Patton) directs, with locations including Italy, Boston, New York and the Napa Valley. Bravo, Giorgio! Bravissimo, Luciano!

Luciano Pavarotti, tenor par excellence, makes his film debut in this romantic comedy. Some of the beautiful songs included are "If We Were in Love," "I Left my Heart in San Francisco," and a number of arias by Verdi, Ponchielli, Donizetti and Puccini. Academy Award Nominations: Best Song ("If We Were in Love").

A world-famous tenor romances a pretty throat doctor while preparing for his return visit to New York City's Metropolitan Opera, the site of a seemingly cursed performance many years before.