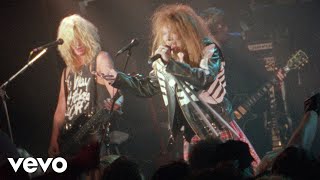 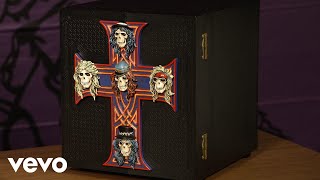 Guns N' Roses: W. Axl Rose (vocals, synthesizer, percussion); Slash (acoustic & electric guitars); Izzy Stradlin (guitar, background vocals, percussion); Duff "Rose" McKagan (bass, background vocals); Steven Adler (drums).
Recorded at Rumbo Studios, Canoga Park, California; Take One Studio, Burbank, California; Can Am Studio, Tarzana, California.
Guns N' Roses' debut, Appetite for Destruction, was a turning point for hard rock in the late '80s -- it was a dirty, dangerous, and mean record in a time when heavy metal meant nothing but a good time. On the surface, Guns N' Roses may appear to celebrate the same things as their peers -- namely, sex, liquor, drugs, and rock & roll -- but there is a nasty edge to their songs, since Axl Rose doesn't see much fun in the urban sprawl of L.A. and its parade of heavy metal thugs, cheap women, booze, and crime. The music is as nasty as the lyrics, wallowing in a bluesy, metallic hard rock borrowed from Aerosmith, AC/DC, and countless, faceless hard rock bands of the early '80s. It's a primal, sleazy sound that adds grit to already grim tales. It also makes Rose's misogyny, fear, and anger hard to dismiss as merely an artistic statement; this is music that sounds lived-in. And that's exactly why Appetite for Destruction is such a powerful record -- not only does Rose have fears, but he is also vulnerable, particularly on the power ballad "Sweet Child O' Mine." He also has a talent for conveying the fears and horrors of the decaying inner city, whether it's on the charging "Welcome to the Jungle," the heroin ode "Mr. Brownstone," or "Paradise City," which simply wants out. But as good as Rose's lyrics and screeching vocals are, they wouldn't be nearly as effective without the twin-guitar interplay of Slash and Izzy Stradlin, who spit out riffs and solos better than any band since the Rolling Stones, and that's what makes Appetite for Destruction the best metal record of the late '80s.
[Universal's deluxe reissue of Appetite for Destruction missed the 30th anniversary of the album's release by a year but that's okay: Appetite wound up burning up the charts in 1988, so having the various deluxe reissues pop up in the summer of 2018 feels fine. Certainly, the extra music available on the three various editions -- the ultra-expensive Locked N Loaded edition has the same bonus material as the four-disc Super Deluxe, while the double-disc Deluxe Edition contains highlights of that bonus material -- is all worth the wait. All of the B-sides and all of the 1986 debut EP Live ?!&@ Like a Suicide are here, along with all of the new material from 1988's G N' R Lies save "One in a Million," whose absence signals Rose's political and emotional growth, but the true discoveries here are the demo sessions that cover disc three and disc four on the Super Deluxe, many of which were cut at the legendary Los Angeles studio Sound City. Most of Appetite was given its first airing here, and while the versions aren't as fiery as the finished album, what's remarkable is that the songs are. That's especially true regarding early versions of "Back Off Bitch" and "November Rain," the latter sounding just as majestic in a solo Rose piano reading as it did on Use Your Illusion. Scattered throughout are covers of "Heartbreak Hotel" and "Jumpin' Jack Flash," signs that the group saw themselves as heirs to all manners of rock & roll rebellion, but the acoustic versions that end this deluxe edition -- which include yet another cover of "Jumpin' Jack Flash" -- serve the same purpose as the acoustic numbers on G N' R Lies: they show how the band was tight and versatile underneath that roar. Although nothing here may eclipse the original Appetite for Destruction, everything added to this deluxe edition enhances the album, offering proof of Guns N' Roses's immense skill while also illustrating how the band captured lighting in a bottle on their debut.] ~ Stephen Thomas Erlewine

Glenn Frey
Above the Clouds: The Very Best of Glenn Frey
$12.70 CD Sale
Add to Cart

Megadeth
Killing Is My Business... and Business Is Good!
$14.30 CD Sale
Add to Cart