An acclaimed wartime drama that is both tender and urgent. A sensitive film that never falls prey to sentiment thanks to the skill of director Maj. W.S. Van Dyke II and the power of a fact-based story that speaks of the universal need for family. 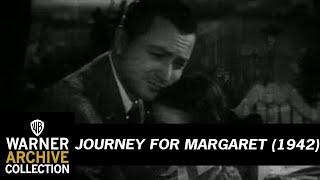 War correspondent John Davis faces drama every day: London aflame from German bombs and the personal sorrow that he and his wife can never have a child of their own. Then John meets Margaret and Peter, two traumatized war orphans who need him as much as he needs something to make his life whole.

Robert Young is John and five-year-old Duse Margaret O'Brien is Margaret in an acclaimed wartime drama that is both tender and urgent, a sensitive film that never falls prey to sentiment thanks to the skill of director Maj. W.S. Van Dyke II (The Thin Man), the delightful rapport between Young and the children and the power of a fact-based story that transcends its era to speak to the universal need for family.

Based upon a true story, JOURNEY FOR MARGARET is a sentimental look at the ravages of war and the heart required to recover from deep wounds. Robert Young plays John Davis, an American journalist covering World War II from London, whose pregnant wife, Nora (Laraine Davis), refuses to leave his side for the safety of New England. When she is injured during an air raid, their unborn child is lost, as is her ability to ever give birth again. Unhinged by her deprivation, Nora returns to the United States while her now sullen husband accepts an assignment to write a story about a home for war orphans. When an emotionally disturbed orphan shows a clear affection for John, his humor begins to alter, and hope returns. Margaret O'Brien and William Severn are both adorable as the orphans. Director W.S. Van Dyke's last film is a quiet, romantic, syrupy examination of hope for the future.

Tear Jerker | True Story | War | Children
This product is made-on-demand by the manufacturer using DVD-R recordable media. Almost all DVD players can play DVD-Rs (except for some older models made before 2000) - please consult your owner's manual for formats compatible with your player. These DVD-Rs may not play on all computers or DVD player/recorders. To address this, the manufacturer recommends viewing this product on a DVD player that does not have recording capability.