This tale of kids gone to (cotton) seed is rightly on the side of the kids and resides in movie lore as a "side-splitting camp masterpiece" (Leonard Maltin's Classic Movie Guide). Mamie Van Doren and Lori Nelson portray the sisters. 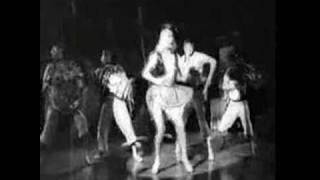 What can anyone do about hitchhiking, skinny-dipping, rock-'n'-rolling vagabonds? One suggestion: haul sisters Penny and Jane and other examples of untamed youth before a judge in the rural South and sentence them to pay for their infractions by picking cotton on a labor farm. Another suggestion: enjoy the movie!

This tale of kids gone to (cotton) seed is rightly on the side of the kids and resides in movie lore as a "side-splitting camp masterpiece" (Leonard Maltin's Classic Movie Guide). Mamie Van Doren - "built like a platinum powerhouse" the film's publicity raved - and Lori Nelson portray the sisters. And Eddie Cochran, best known for that eternal song of teen ennui "Summertime Blues," plays one of the farm inmates.

UNTAMED YOUTH is a camp classic, so stupefyingly awful that it's actually festive. The villains are cotton grower Tropp (John Russell) and corrupt female judge Mrs. Steele (Lurene Tuttle), who conspire between them to ship female convicts to work on Tropp's farm for starvation wages. Two of the new arrivals are professional entertainers Penny (Mamie Van Doren) and Janey (Lori Nelson), arrested on trumped-up charges and forced to work off their sentence on the Tropp spread. Salvation arrives in the form of Bob (Don Burnett), Mrs. Steele's son, who intends to expose his mom's eeeevil scheme. Featured in the cast is rock-and-roller Eddie Cochran, who gets to sing one song -- while Mamie Van Doren is permitted four numbers. To repeat examples of the film's howlingly bad dialogue would be to rob the viewer of the perverse pleasure of experiencing UNTAMED YOUTH in all its trashy glory.

Prison / Prisoners | Exploitation | Prison
This product is made-on-demand by the manufacturer using DVD-R recordable media. Almost all DVD players can play DVD-Rs (except for some older models made before 2000) - please consult your owner's manual for formats compatible with your player. These DVD-Rs may not play on all computers or DVD player/recorders. To address this, the manufacturer recommends viewing this product on a DVD player that does not have recording capability.