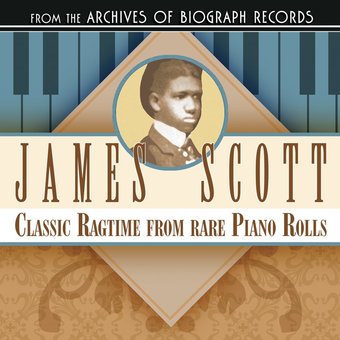 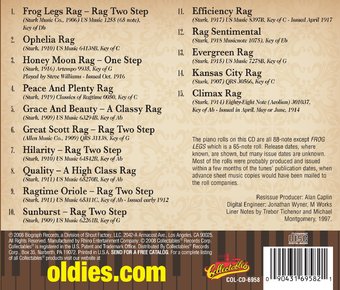 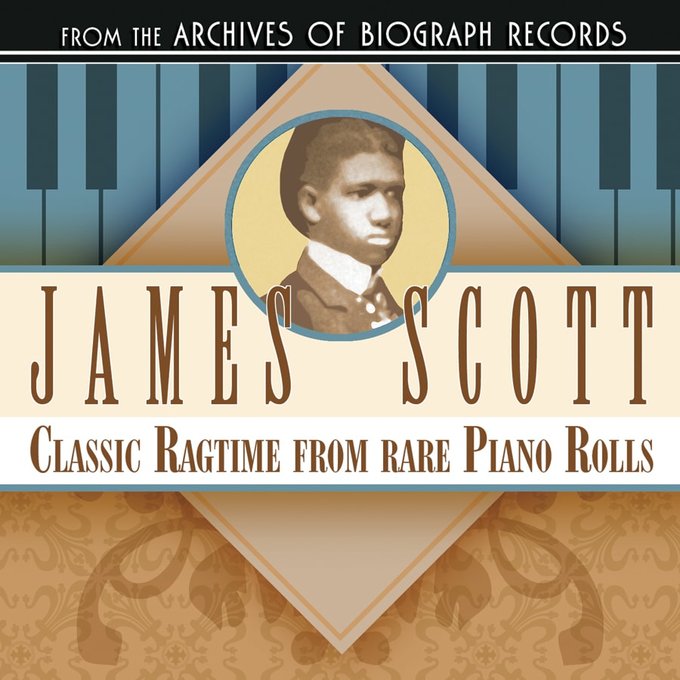 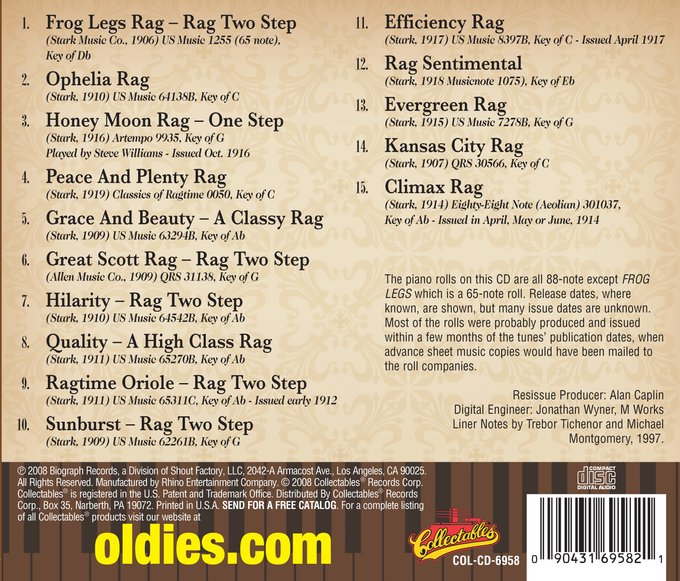 Ragtime at its best from acclaimed pianist, James Scott, as recorded on piano rolls in the early 1900's. From the vaults of Biograph Records.

Personnel: Steve "Syco Steve" Williams (piano).
Liner Note Authors: Mike Montgomery; Trebor Tichenor.
Recording information: 1906-1919.
Fifteen of ragtime composer James Scott's player piano rolls were issued on a Biograph LP in 1974, made their compact disc debut in 1997, and reappeared in 2008 on the Collectables label, with key signatures affixed to the titles. The rolls were originally cut and released during the years 1906-1919. James Sylvester Scott was born in Neosho, MO in 1886 and had developed into a skilled pianist by the age of thirteen. Possessed of perfect pitch, the boy is said to have enjoyed identifying key signatures but insisted upon naming chords rather than single notes. The cousin of blues singer Ada Brown, James Scott was initially influenced by Scott Joplin but soon developed a body of works characterized by his own dazzling ornate complexity and which manifested a tendency to move at accelerated tempi that contributed to a hastening trend in keyboard execution which Joplin himself openly deplored. Scott is credited with having written some 30 rags (three of which are marches); four songs, and three waltzes. Of the 15 rags reproduced here, the 1906 "Frog Legs Rag," a 2-step in D flat, and the 1907 "Kansas City Rag" in C, might well be counted among the handful of Connor-ized piano rolls that were cut by the composer himself. Scott's uncommonly virtuosic playing (facilitated by lightning sensibilities and square, short fingers on small, agile hands) caused his contemporaries to comment that his rolls sounded "like two people playing." Although technicians in player piano roll processing manufactories are known to have felt entitled to add extra notes to the rolls, it is quite likely that Scott's transcriptions were so Baroque that no embellishments were deemed necessary. The rest of the rolls were most likely played by pianists who worked for the piano roll companies. It is possible, for example, that "Grace and Beauty" and "Ragtime Oriole" were knocked off by a fellow remembered only as "W. Arlington." Ragtime interpreter William Bolcolm has correctly identified "a pervasive sunniness of temperament" that distinguishes much of James Scott's works from the at times profoundly ruminative constructs of Scott Joplin. This is evident in most of the rolls heard here, including the "Sunburst" and "Great Scott" rags, both set in the key of G and dating from 1909. Five rags -- "Grace and Beauty," "Hilarity," "Quality," "Ragtime Oriole," and the "Climax Rag" -- were written in the key of A flat and published during the years 1910-1914. The post-WWI compositions are characterized by an unusual number of notes and have always been difficult for the average player to negotiate. Bolcolm, in fact, assesses them as "among the most demanding of all published piano ragtime." Towards the end of his life, James Scott is known to have led an octet in Kansas City, where he succumbed to chronic dropsy (edema) in 1938. The best ways to savor his legacy are to consult the recordings of William Albright and William Bolcolm, and burrow into the old time player piano rolls that may be heard on this excellent compact disc. ~ arwulf arwulf

38%off
Paul Quinichette / The Gene Roland Septet
The Kid From Denver
$7.98
Add to Cart