JazzTimes: "...Fans of rural blues will definitely dig this one." 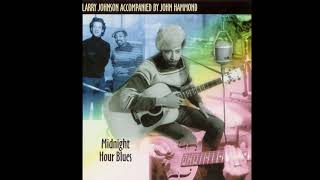 Larry Johnson's performances on guitar are among the best example of Delta and Texas blues' styles. Here are some of Johnson's best, including "Walking Blues", "Nobody's Biz-ness" and "Tell Me Mama". On this release, he's accompanied by John Hammond. From the archives of Biograph Records.

JazzTimes - 5/96, p.65
"...Fans of rural blues will definitely dig this one."
Living Blues - 1-2/96, pp.89-90
"...Throughout, Johnson's plaintive vocals and dexterous guitar work reveal an authenticity that would have passed muster four decades before this collection was waxed."

38%off
Mississippi Fred McDowell / Furry Lewis
When I Lay My Burden Down (CD)
$7.98 on Sale
Add to Cart

54%off
Lead Belly / Blind Willie McTell
Masters of The Country Blues
$5.98 on Sale
Add to Cart