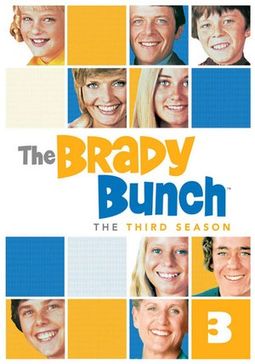 Created by Sherwood Schwartz of GILLIGAN'S ISLAND fame, 1970s sitcom THE BRADY BUNCH remains one of the most beloved comedy series in television history--not to mention a full-blown pop culture phenomenon replete with iconic catchphrases and a ubiquitous theme song. Debuting in 1969, the series eschewed the social turbulence of its era for squeaky-clean, escapist entertainment centered around the union of lovely-lady divorcée Carol Martin (Florence Henderson) and her three flaxen-haired daughters, Marcia (Maureen McCormick), Jan (Eve Plumb), and Cindy (Susan Olsen), to a widower named Mike Brady (Robert Reed), his three sons Greg (Barry Williams), Peter (Christopher Knight), and Bobby (Mike Lookinland), and their devoted housekeeper Alice (Ann B. Davis). A throwback to the wholesome innocence of the 1950s, the series inhabited an impossibly perfect moral universe populated by bellbottoms, butterfly collars, and domestic disputes uncomplicated enough to be solved in under 30 minutes--ensuring a cult following among both devotees of irony and those who genuinely long for a simpler time.

THE BRADY BUNCH is captured in all its nostalgic glory in this complete collection of episodes from the series' third season, including "Getting Davy Jones," named by TV Guide as an all-time classic; "Her Sister's Shadow," in which Jan utters the famous whine of "Marcia, Marcia, Marcia;" "Dough Re Mi," which finds the kids' fledgling music career threatened by Peter's pubescent voice change (and also features the Brady pop tune "We Can Make the World a Whole Lot Brighter"); and "Ghost Town, U.S.A.," the first of a three-parter following the Bradys on their family vacation to the Grand Canyon.