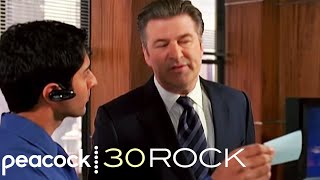 After scoring a second Emmy for Outstanding Comedy Series, the show returned for its third season with a bevy of high-octane guest stars: Salma Hayek and Jennifer Aniston both turn up as (crazy) love interests for Jack; Steve Martin plays a housebound billionaire with a thing for Liz; and everyone from Elvis Costello to the Beastie Boys makes an appearance in the finale's hysterical "Kidney Now!" benefit concert. Meanwhile, Liz still has to please her regular staff of goofballs, which means faking a trip to outer space for Tracy and offering sexual favors to an accountant who has approval over the TGS budget. Throw in left-field references to HARRY AND THE HENDERSONS, NIGHT COURT, and MYSTIC PIZZA (complete with celebrity cameos to match), and you've got one of the best seasons of TV comedy in recent memory. This collection includes every episode from the 2008-09 season of 30 ROCK.