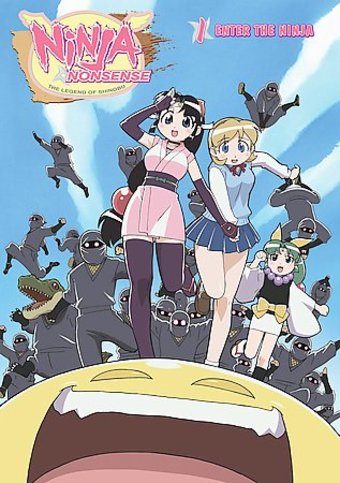 NINJA NONSENSE is a racy comedy anime series about a young girl whose unorthodox ninja training involves carrying out unusual sexual tasks like stealing girls' underwear for her perverted headmaster. This volume introduces the bawdy anime series with the first six episodes: "Ninja Trainee Shinobu," "The Head Master Appears," "Ninjas Elated Over Cherry Blossom Viewing," "Shinobu Goes on a Date with Kaede," "Onsokumaru Gets Angry," and "Shinobu Leaves the Manor."

Ninja Nonsense: The Legend of Shinobu DVD 1: Enter the Ninja
Take the comedy of SOUTH PARK, combine it with one totally cute (and naive) ninja-girl trainee, a horde of ninjas under the perverse tutelage of her headmaster: a strange, yellow, spherical, pudgy... creature... named Onsokumaru, and you get the craziest, most hilarious anime show ever created! Ninja trainee Shinobu is sent on a mission by her pervy headmaster to collect underwear from high school girls! Her first target' Kaede Shiranui! Then, Shinobu takes Kaede on a crazy adventure to the Valley of the Ninja to meet her Head Master! And just when things couldn't get any weirder, the rainy weather drives bored ninjas into looking for the Loch Ness Monster in their pond... only to find an Onsokumaru-eating crocodile instead! Later, Onsokumaru's greatest reward may be at hand when Shinobu and Kaede are set to go on a date! Can this be allowed'! Ninja-master Onsokumaru and masked-nobleman Sasuke decide to keep a close eye on this spectacle of nature! Then, Onsokumaru's arch-enemy is about to arrive on the scene. It's Shinobu's little sister, Miyabi! Onsokumaru decides it's time for a little one-on-one... just her, him, and his crocodile power-suit! And poor Shinobu's being kicked out of the manor'! Maybe Kaede's family would be interested in adopting a ninja into their family... PLUS! DVD 1 includes a 12-page booklet featuring Japanese production journals, exclusive artwork, liner notes, and much more!