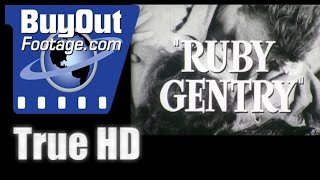 Reprising much of the plot of his earlier DUEL IN THE SUN, King Vidor also chose that film's leading lady, Jennifer Jones, to fill the title role of RUBY GENTRY. Ruby Corey, a poor, beautiful young woman from the backwoods of North Carolina, lusts after Boake Tackman (Charlton Heston), scion of one of the wealthier families in town. Although far from indifferent to Ruby's charms, Boake opts to abide by his family's preference for a mate from his own social stratum. Meanwhile, Jim Gentry (Karl Malden), the wealthiest man in town--who also has an eye for the sultry young woman--asks her to marry him. To spite Boake as well as the rest of the contemptuous townspeople, she agrees. When an accident takes Gentry's life, the town holds Ruby responsible, without any justification. In the spirit of vengeance, the widow demands full payment of all outstanding debts owed to her husband, further antagonizing the town as well as threatening the survival of Tackman's fledgling business. Malden gives an excellent performance in this potboiler deftly handled by Vidor.