The Allman Betts Band Down to the River 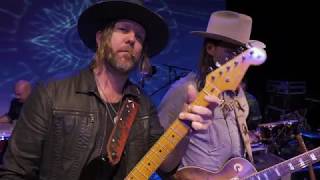 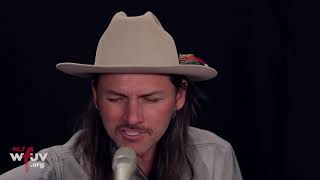 Personnel: Duane Betts, Devon Allman (guitar, acoustic guitar, background vocals); Johnny Stachela (guitar, slide guitar); Matt Ross-Spang (acoustic guitar); Peter Levin (piano, Hammond b-3 organ, Wurlitzer organ); John Lum (drums); Scott Bryan (percussion, background vocals); Berry Oakley, Jr. (background vocals).
Audio Mixer: Matt Ross-Spang.
Liner Note Author: Clarence G. Wilde.
Recording information: Muscle Shoals Sound Studios.
Photographer: Chris Brush.
Devon Allman and Duane Betts make no attempt to hide their lineage. The pair are the sons of Gregg Allman and Dickey Betts, two of the founding and defining members of the Allman Brothers Band, and they've named their band so it rhymes with the group of their famous fathers. More than that, their 2019 debut album Down to the River consciously evokes the sound of the Allman Brothers Band. The pair don't attempt to expand the Southern-fried hybrid of blues, rock, soul, and country; at times, it feels like they're spinning such classics as "Melissa" and "Ramblin' Man" for their own purposes, alluding to these classics as a way to both nod at their audience and connect with them. Such direct acknowledgment of their roots can mean that the Allman Betts Band open themselves up to direct comparisons with their fathers, but decoding Down to the River as a series of references and influences misses the intent of the duo. Allman and Betts are intentionally following in their footsteps of their fathers, so they've chosen to work with a limited palette, one that cherry-picks the best moments of the past. If Down to the River isn't as adventurous or hungry or exploratory as any Allman Brothers Band album, there's nevertheless a deliberately cultivated warmth that's designed to appeal to Allman fans-and, given a shot, Down to the River may well appeal to that audience. ~ Stephen Thomas Erlewine

Lukas Nelson & Promise of the Real
Turn Off the News, Build a Garden
$16.30
Add to Cart