With a lovely new bride and a diplomatic appointment imminent, David Talbot sees his life on an upswing - if he is really David Talbot. Blackmailers say he is actually a murderer and thief named Jean Pelletier. 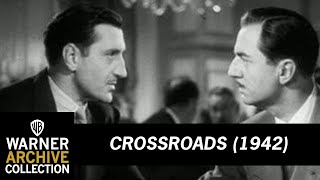 With a lovely new bride by his side and a diplomatic appointment imminent, David Talbot sees his life on an upswing - if he is really David Talbot. Blackmailers say he is actually a murderer and thief named Jean Pelletier. As they present their evidence, Talbot, whose past includes incidents of amnesia, begins to wonder if he's been living a lie. William Powell played an amnesiac for laughs in I Love You Again, but here he invests Talbot with the urgency and stunned disbelief of a man whose life is in sudden upheaval. Hedy Lamarr (as Talbot's resourceful bride), Basil Rathbone and Claire Trevor cos-tar in this double- and triple-cross tale located on a crossroads of uncertainty.

An innocent man is put on trial, but is he really as innocent as he claims' Diplomat David Talbot (William Powell) and his bride Lucienne (Hedy Lamarr) are enjoying a honeymoon in Paris when David is confronted by extortionists who demand money in exchange for not turning him in to the police. David has no idea what the men are talking about and ignores their threats, but the men prove good to their word, and David finds himself on trial for a series of thefts. At the trial, David's name is cleared when Henri Sarrow (Basil Rathbone) testifies that he knew the man who committed the crimes, a friend of his who recently died. However, after the trial, David meets Sarrow, who informs David that he lied under oath; according to Sarrow, David did indeed commit the robberies while suffering from amnesia after a severe blow to the head, and if he wants to keep the facts quiet, he'll do whatever Sarrow says.

Mystery | Blackmail | France | Vacations | Criminals | Couples
This product is made-on-demand by the manufacturer using DVD-R recordable media. Almost all DVD players can play DVD-Rs (except for some older models made before 2000) - please consult your owner's manual for formats compatible with your player. These DVD-Rs may not play on all computers or DVD player/recorders. To address this, the manufacturer recommends viewing this product on a DVD player that does not have recording capability.

26%off
The Strange Love of Molly Louvain
$9.60 Spring Sale
Add to Cart