A Majority of One

Live and learn, the saying goes. Japanese businessman and widower Koichi Asano and Brooklyn widow Bertha Jacoby are at an age where they've done a lot of living and learning. Now, with a bit of luck, love may reenter their lives. 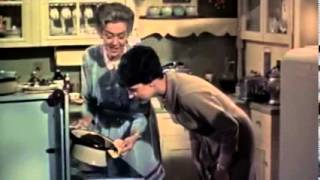 Majority of One, A Original Trailer

Live and learn, the saying goes. Japanese businessman and widower Koichi Asano (Alec Guinness) and Brooklyn widow Bertha Jacoby (Rosalind Russell) are at an age when they've done a lot of living and learning. Now, with a bit of luck, love may reenter their lives - if they learn again the lessons of tolerance, forgiveness, kindness and devotion.

Russell and Guinness play unlikely romantics in this touching comedy based on the Broadway hit and directed by Mervyn LeRoy. Russell thought the role of Bertha was a radical departure for her. But she seized the challenge - and won the fourth of her five Best Actress Golden Globe? Awards. "In so many films, my comedy was brittle and came from the lips," Russell said. "Here the humor stems from the heart - and Mrs. Jacoby's heart is as big as the world."

Rosalind Russell plays Mrs. Jacoby, a Jewish widow living in Brooklyn whose only son has been killed in World War II by the Japanese. Her daughter, Alice (Madlyn Rhue), is married to businessman Jerome (Ray Danton), and the couple convinces the reluctant widow to join them on a trip to Japan. On the boat trip Mrs. Jacoby meets Koichi Asano (Alec Guinness), a Japanese businessman who like herself has lost family members in the war. In spite of these grave personal losses, Asano and Jacoby develop a romantic attachment to each other. But Asano is one of the men who with whom Jerome is conducting business, and Jerome believes Asano is feigning interest in his mother to achieve business aims. This popular Broadway play weaves both comedic and dramatic elements to question whether individuals can overcome the mutual suspenses and prejudices that war wounds have left upon their souls.

A Japanese businessman and a widower find love in the autumn of life in this heartwarming movie based on the Broadway play by Leonard Spigelgass.