Any fool can steal. I've been embezzling. Peter Ustinov stars and co-scripts the Oscar-nominated screenplay about a dapper rogue who uses a corporation's mainframe computer to issue checks to bogus companies, then proceeds to cash the checks. 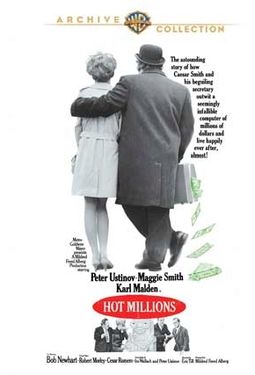 "Any fool can steal. I've been embezzling." The con is on in Hot Millions, a droll caper whose wit and warmth recall the Ealing Studios romps of the 1950s. Peter Ustinov heads an engaging cast and co-scripts the Oscar-nominated screenplay about a dapper rogue (Ustinov) who uses a corporation's mainframe computer to issue checks to bogus companies, then proceeds to cash the checks. While he's stealing (sorry, embezzling) millions, delightful Maggie Smith nearly steals the show as a featherheaded secretary. Karl Malden as a pill-gobbling CEO and Bob Newhart, he of the button-down mind, add to the affable fun. "When it was over, I realized that I'd been smiling for two hours" (Stanley Kauffmann, The New Republic).

Comic heist caper about a high-class embezzler whose modus operandi is seriously compromised with the onset of high-tech computers into the world of big business.

Buddies | Scams And Cons | Mishaps
This product is made-on-demand by the manufacturer using DVD-R recordable media. Almost all DVD players can play DVD-Rs (except for some older models made before 2000) - please consult your owner's manual for formats compatible with your player. These DVD-Rs may not play on all computers or DVD player/recorders. To address this, the manufacturer recommends viewing this product on a DVD player that does not have recording capability.

24%off
Tea With Mussolini
$9.80 Super Savings
Add to Cart

The Biggest Bundle of Them All
$20
Add to Cart