Guess who just made number two? 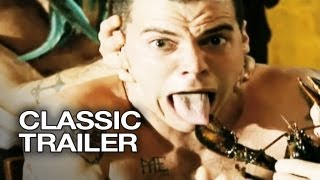 Born of the world of underground skateboard videos--where viewers watch more for the accidents than for the tricks--JACKASS began as an MTV series before becoming a big-screen sensation in 2002. Four years on, Johnny Knoxville is a movie star, and cohorts Bam Margera, Chris Pontius, and Steve-O have started successful franchises. One would think that they have moved on---yet here they are, back for more stunts and pranks involving defecation, ejaculation, and pubic hair, and ranging from the disgusting to the ridiculous.

Like its predecessor, undoubtedly--in relation to its budget--one of the most profitable studio films in history, JACKASS: NUMBER TWO is merely a series of wince-inducing stunts. These often result in injury--filmed with a handheld camcorder. Highlights this time around include a four-person teeter-totter in the middle of a bull ring; Knoxville, Pontius, and Margera being blasted with riot control pellets; fellow skate video alumnus Spike Jonze in elderly-woman makeup losing his clothing in public; and Knoxville blasting off on the outside of a rocket. And these are just the beginning. There are also puncture wounds, the guys endlessly laughing at one another's injuries, and more male nudity than one normally sees in a mainstream film (including a surplus of scarred and bruised bottoms). JACKASS: NUMBER TWO is bookended by two beautifully filmed sequences--first the gang does a jaw-dropping running of the bulls down a suburban street. Then (and nothing is being spoiled here) the film concludes with an elaborate Busby Berkely musical number. These sequences up the ante a little bit from the first installment, and though JACKASS TWO certainly isn't for everyone, it remains the best and safest way to see a guy blasted into a lake in a rocket-fueled wheelchair.

15%off
Jackass: The Lost Tapes
$11 Super Savings
Add to Cart