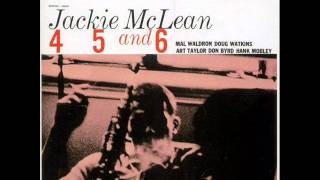 Jackie McLean - Why Was I Born? (Music Video) 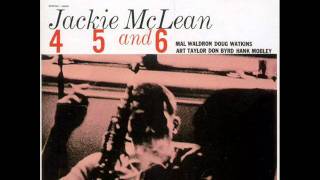 Personnel: Jackie McLean (alto saxophone); Hank Mobley (tenor saxophone); Donald Byrd (trumpet); Mal Waldron (piano); Doug Watkins (bass); Arthur Taylor (drums).
Recorded at the Van Gelder Studio, Hackensack, New Jersey on July 13 & 20, 1956. Originally released on Prestige (7048). Includes liner notes by Ira Gitler.
Digitally remastered using 20-bit K2 Super Coding System technology.
In 1956 Jackie McLean was only beginning to assert himself as a true individualist on the alto saxophone, exploring the lime-flavored microtones of his instrument that purists or the misinformed perceived as being off-key or out of tune. 4, 5 and 6 presents McLean's quartet on half the date, and tunes with an expanded quintet, and one sextet track -- thus the title. Mal Waldron, himself an unconventional pianist willing to explore different sizings and shadings of progressive jazz, is a wonderful complement for McLean's notions, with bassist Doug Watkins and drummer Art Taylor the impervious team everyone wanted for his rhythm section at the time. The quartet versions of "Sentimental Journey," "Why Was I Born?," and "When I Fall in Love" range from totally bluesy, to hard bop ribald, to pensive and hopeful, respectively. These are three great examples of McLean attempting to make the tunes his own, adding a flattened, self-effaced, almost grainy-faced texture to the music without concern for the perfectness of the melody. Donald Byrd joins the fray on his easygoing bopper "Contour," where complex is made simple and enjoyable, while Hank Mobley puts his tenor sax to the test on the lone and lengthy sextet track, a rousing version of Charlie Parker's risk-laden "Confirmation." It's Waldron's haunting ballad "Abstraction," with Byrd and McLean's quick replies, faint and dour, that somewhat illuminates the darker side. As a stand-alone recording, 4, 5 and 6 does not break barriers, but does foreshadow the future of McLean as an innovative musician in an all-too-purist mainstream jazz world. ~ Michael G. Nastos

Jackie McLean
A Long Drink Of The Blues
$16.10
Add to Cart

Phil Woods
Live At The Village Vanguard
$4.98 on Sale
Add to Cart