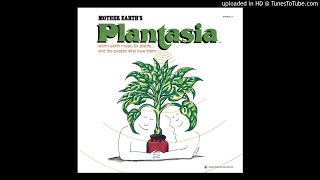 Personnel: Mort Garson (electronics).
Liner Note Author: Andy Beta.
Recording information: Patchcord Productions, Hollywood, California.
Illustrator: Marvin Rubin.
Considering that many of Mort Garson's pioneering electronic albums were based on astrology and the occult, a set of compositions made just for plants is more down-to-earth in more ways than one. Inspired by his wife Margaret's houseplants and intended as a companion piece to the book The Secret Life of Plants, 1976's Mother Earth's Plantasia was initially available only if someone purchased a plant from Los Angeles' Mother Earth Plant Boutique -- or a Simmons mattress from Sears. While the album might not live up to its claim of encouraging plants to grow, it definitely makes charming use of Garson's skills and creativity as a composer. Through the music he wrote for commercials -- and for CBS' broadcast of the moon landing -- he introduced the wild, unfamiliar sounds of the Moog synthesizer to a mainstream audience; similarly, on Mother Earth's Plantasia, his pieces balance more experimental and more traditional musical elements. With its brassy and harp-like tones, "Plantasia" itself is a gentle yet majestic fanfare for the album, drawing listeners into its celebration of the ageless world of plants via futuristic sounds. Elsewhere, Garson's roots as a classically trained composer lie just underneath the surface of "Symphony for a Spider Plant"'s elegant counterpoint and the downright magical-sounding intersection of classical and electronic music on "Concerto for Philodendron and Pothos," one of the album's most transporting moments. At times, Mother Earth's Plantasia is wonderfully kitschy: The bubbly "You Don't Have to Walk a Begonia," is one of several moments where Garson's past as a lounge music composer comes to the fore. Yet even the songs that could be too on-the-nose are remarkably inventive. "Baby's Tears Blues" manages to be sultry and whimsical at the same time, sprinkling its swaying rhythm with what sounds like stardust; befitting its name, "Music to Soothe the Savage Snake Plant" gives a slightly spooky cast to the album's calming vibe. The album's more forward-thinking moments are among its most striking: "Ode to an African Violet"'s slinky rhythm and gravity-defying synths make it a standout along with "Rhapsody in Green," where rippling tones suggest unfurling leaves, dewdrops, and gentle breezes so meditatively that it borders on proto-New Age music. Meanwhile, "Swingin' Spathiphyllums" is a gorgeous piece of cosmic pop that seems to call future travelers like Stereolab and Optiganally Yours into being. While some of Garson's other albums may have been more overtly groundbreaking, there's something endearing and pure about Mother Earth's Plantasia that resonates even more powerfully decades later. Its cult-favorite status in the late 2010s led Sacred Bones to reissue it in 2019 (the label's founder, Caleb Braaten, first stumbled upon it in 2002 while working in a Denver record store), reminding listeners old and new of Garson's legacy as a groundbreaking electronic artist. ~ Heather Phares

Yanni
Live at the Acropolis [Bonus Track]
$10
Add to Cart