A respected doctor fakes his death, deserts his family, throws away his career and drives himself to the edge of madness - all for the love of saloon singer Nora Prentiss. 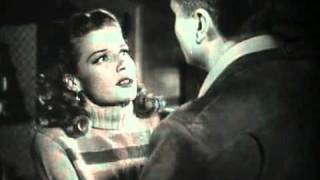 A respected doctor (Kent Smith) fakes his death, deserts his family, throws away his career and drives himself to the edge of madness - all for the love of saloon singer Nora Prentiss (Ann Sheridan). From the opening shot of a media circus engulfing a handcuffed mystery man to the final scene of a scarred face peering from a cell window, Nora Prentiss ensnares viewers in its atmospheric world of sex, violence, shady motives, seedy nightclubs and claustrophobic lensing by master cinematographer James Wong Howe (Hud, Body and Soul) that makes the camera a vital character in the drama. A harrowing twist ending adds another layer of shadow to this smoky, moody, totally absorbing film noir.

In this slick melodrama, a sort of film-noir for women, a nightclub singer has an affair with an unhappily married San Francisco doctor. Though the physician desperately wants to leave his wife, he lacks the courage to ask for a divorce. In retaliation, the singer accepts an offer to move East and start up a new club in New York. Lost without the singer, the doctor is without option until his partner suddenly dies. With a burst of inspiration, he fakes his own death and flees to New York. Later, he is horrified to learn that his death has been officially declared a homicide, and so he goes into hiding in the singer's apartment. To cope with his fear and the increasing success of his lover, the physician begins drinking heavily. This only makes him paranoid and more depressed and he begins to suspect his lover is having an affair. Upon confronting the "lover," a fight ensues, the doctor wins, and thinking he killed his rival, he takes off -- only to end up in a horrible traffic accident that leaves his face unrecognizable. Though plastic surgery gives him a new identity, it is at that time that he is arrested and sent back to California to stand trial for his own murder. Rather than burden his family with the shock that he is still alive, the doctor insists that his lover keep mum, and he stoically goes to trial where he is sentenced to Death Row. Beautifully photographed by James Wong Howe in typically expressionistic style, the film focuses on the desperation and entrapment of the characters and expresses a true bleak, fatalistic film-noir sensibility which makes this film unique in the genre.

Death | Deception | Film Noir | Melodrama | News | Affairs | Families | Love | Cars / Automobiles
This product is made-on-demand by the manufacturer using DVD-R recordable media. Almost all DVD players can play DVD-Rs (except for some older models made before 2000) - please consult your owner's manual for formats compatible with your player. These DVD-Rs may not play on all computers or DVD player/recorders. To address this, the manufacturer recommends viewing this product on a DVD player that does not have recording capability.