A squabbling stage couple gets mixed up with an amorous fan and her jealous suitor. 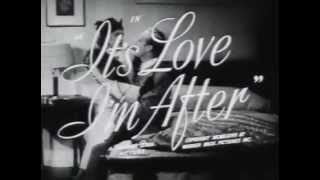 All the world's a stage and there are many fine players in it in this gleeful backstage costume comedy: Olivia de Havilland (as the countess), Brian Aherne (Garrick) and a clever ensemble. Have a great time!

Bette Davis and Leslie Howard play an egotistical Broadway acting team famous for their romantic scenes. In truth, Davis and Howard are crazy about each other, but they spend so much time bickering that they never get around to marriage. The relationship is complicated by young heiress Olivia De Havilland, a fan who worships the ground Howard walks on. Howard tries to scare off the star-struck young lady by threatening her with seduction, but it turns out she enjoys the prospect of being seduced. Everything is straightened out by the climax, though Davis and Howard never quite get to the altar. IT'S LOVE I'M AFTER is all the more enjoyable when one recalls the "serious" movie romances carried on by Leslie Howard with both Bette Davis (in THE PETRIFIED FOREST) and Olivia De Havilland (in GONE WITH THE WIND).

Romance | Love Triangle | Showbiz | Romantic Comedy | Relationships | Actors | Backstage
This product is made-on-demand by the manufacturer using DVD-R recordable media. Almost all DVD players can play DVD-Rs (except for some older models made before 2000) - please consult your owner's manual for formats compatible with your player. These DVD-Rs may not play on all computers or DVD player/recorders. To address this, the manufacturer recommends viewing this product on a DVD player that does not have recording capability.

Customer Rating:
Based on 2435 ratings.


I was so afraid this would be bad sound and bad picture quality but it was perfect on all counts. Only thing I could have wished for were subtitles but seeing as how this was manufactured on demand, I'm ridiculously glad just to have it.