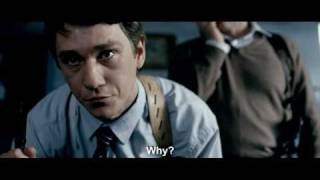 Two cops must unravel a mystery in one of the most forbidding locales on Earth in this thriller, shot in Russia by Irish filmmaker Johnny O'Reilly. Andrey (Alexei Guskov) and Slava (Anton Shagin) are a pair of police detectives who've been dispatched to a remote weather station in the Russian arctic after the two meteorologists in charge, Drozdov (Sergey Garmash) and Ivanov (Vladimir Gusev), abruptly lose contact with their superiors. Both Drozdov and Ivanov are experienced weather monitors who have interests to keep them occupied during the long months of isolation -- Drozdov studies lore about the Abominable Snowman, while Ivanov builds sculptures from household objects -- but their new housekeeper, a disturbed young man named Romash (Pyotr Logachev), doesn't fare so well and spends much of his free time in hiding. Soon the three men are joined by a wealthy businessman, Vadim (Sergey Yushkevich), and his young bride Irina (Marina Alexandrova), who got lost while exploring caves in the frozen wastes. But when Andrey and Slava arrive on the scene, the post is abandoned and in a shambles. What happened to the meteorologists and their guests' Is there a murderer on the prowl, or is the answer something more mysterious' PRACHSYA (aka THE WEATHER STATION) received its American premiere at the American Film Institute's 2010 AFI Fest.