A lot of TV stations have forgotten what "quality" means, but not Channel 62. They NEVER knew what it meant. 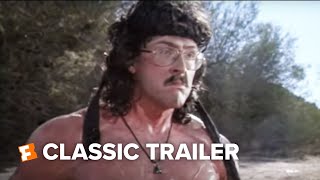 Funnyman "Weird" Al Yankovic stars in this comedy as George Newman, a man who takes over a low-rent TV station won by his uncle in a poker game. Newman's unconventional methods for boosting ratings include giving the station's janitor his own children's program -- with spectacularly successful results. Complications ensue when the unscrupulous head of a rival network tries to drive Newman off the air, but there's still plenty of time out for fantasy music video segments and TV bits which showcase Yankovic's talents as a parodist.

George, a loser guy, gets a lucky break when his dad wins a failing TV station in a poker game. When pop says he has to sell the station to pay gambling debts, George scrambles to buy the station, which he has pushed to the top of the ratings. But his arch rival seems to have the same idea.

So I Married an Axe Murderer (Blu-ray)
$13.10 Super Savings
Add to Cart