Bette Davis stars with Barry Sullivan in this compelling look at why people drift apart in marriage and seek divorce, with all its consequences. 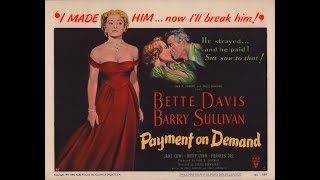 Just before filming ALL ABOUT EVE, Bette Davis starred in the marital melodrama PAYMENT ON DEMAND. Davis plays Joyce Ramsey, the wife of David Ramsey (Barry Sullivan), who one fine morning demands a divorce. Most of the film is in flashback, recounting the events leading up to the marital schism. After David takes up with a school teacher (Frances Dee), Joyce heads for a Haitian vacation, hoping to spark a few affairs of her own. But after a chance meeting with an old friend (Jane Cowl) who's become hard and cynical since her own divorce, Davis heads back to the States and attempts to patch up her marriage. Director Curtis Bernhardt was particularly proud of the opening scene in PAYMENT ON DEMAND, wherein Barry Sullivan requests a divorce as calmly as if he were ordering breakfast.

Romance | Melodrama | Marriage | Teachers
This product is made-on-demand by the manufacturer using DVD-R recordable media. Almost all DVD players can play DVD-Rs (except for some older models made before 2000) - please consult your owner's manual for formats compatible with your player. These DVD-Rs may not play on all computers or DVD player/recorders. To address this, the manufacturer recommends viewing this product on a DVD player that does not have recording capability.