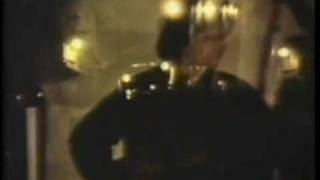 Originally released on Creation Records.
After the triumph of Forever Breathes the Lonely Word, Felt's seventh album, Poem of the River, comes as something of a letdown. Short at only six tracks, the songs don't come together as magically as they did previously and the album feels fragmented, as if someone got halfway through the mixing process and gave up. Martin Duffy's organ rides too high in the mix, the guitars tend to disappear at inopportune times, and Lawrence's vocals are often buried. Working with Mayo Thompson as producer may not have been the best choice; taking the songs to Robin Guthrie (who had done a less than stellar job for them in the past) was even worse. That being said, even while operating at about 75% of their potential, Felt were still working at a higher level than almost every other band at the time. Poem of the River's treasures may be tricky to unearth, but they are worth the effort. Lawrence's songs are drawn from a deep, dark place within the singer's psyche and he sings them in a simple, unadorned fashion that feels blindingly honest. He taps into serious defiance on the explosive "Declaration," details a love affair gone cold on the majestic "She Lives by the Castle," and struggles with isolation and loss on the rest of the album. The overdone production doesn't always match up with the lyrics or Lawrence's stark vocals, but when it comes together the results can be heart-wrenchingly beautiful. "Stained Glass Windows in the Sky" has some of the jaunty jangle that made the previous album so great, the first half of "She Lives by the Castle" is darkly beautiful (the second half is overshadowed by an endless organ solo), and the lengthy "Riding on the Equator" is the record's highlight, with Lawrence's desperate vocals, the spiraling guitar solos, and the sweeping organ coming together to dredge up some epic emotions. Poem of the River is a tough-luck album. The songs are there and Lawrence sets aside all the cool detachment of the past, putting his heart into his vocals, but the production team let the band down painfully and it's almost enough to sink what could have been a really impressive follow-up to Forever Breathes the Lonely Word. As it stands, Poem of the River is a minor Felt album but still one worth discovering, because -- despite the flaws -- it's still Lawrence and it's still Felt. ~ Tim Sendra