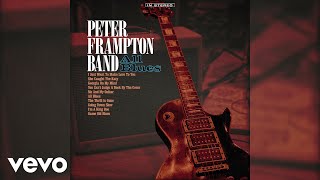 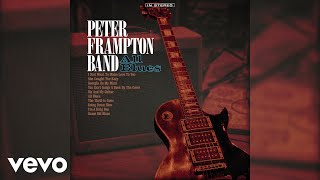 Personnel: Peter Frampton (vocals, electric guitar); Adam Lester (electric guitar, background vocals); Rob Arthur (strings, piano, organ, Wurlitzer organ, background vocals); Dan Wojciechowski (drums, tambourine).
Recording information: Studio Phenix Nashville, TN.
Photographer: Austin Lord.
All Blues represents a return to roots of sorts for Peter Frampton. At the outset of his career, he was a hotshot six-string slinger, earning his stripes playing sheets of loud, gnarled guitar in Humble Pie, the band Steve Marriott formed after leaving the Small Faces. Frampton never lost his rep as a great guitarist and the blues was never far from his fingertips, but he also didn't devote a record to the blues the way he does on this 2019 album. It's possible Frampton intended the album to be part of a full-circle farewell: when he announced the album's release and its accompanying tour, he also announced that he has inclusion-body myositis, a degenerative autoimmune disease that weakens the muscles. Knowledge of Frampton's disease does lend All Blues a degree of poignancy; it's not intended as his final album -- at the time of its release, he had a collection of original material in the works -- yet it's hard not to think that it may not exist if Frampton didn't believe he should seize the day. That's precisely what he does on All Blues, an album that takes its name from the Miles Davis composition that kicks off the trumpeter's seminal 1959 album Kind of Blue. Frampton's choice to cover Davis suggests how he's willing to play within the margins of this album, adding hints of jazz and swing. Primarily, though, he's interested in delivering revved-up covers of blues standards, occasionally with the assistance of a friend: Sonny Landreth pops up on "The Thrill Is Gone," Steve Morse shows up on "Going Down Slow," while Kim Wilson plays on "I Just Want to Make Love to You." If Frampton doesn't take many chances with either the songs or arrangements -- this is straight-up classic British blues that leans heavily on the Chicago school -- there's still a palpable sense of passion and joy on All Blues, and that evident big, beating heart makes it worth a spin. ~ Stephen Thomas Erlewine