Dizzy Gillespie One Night In Washington 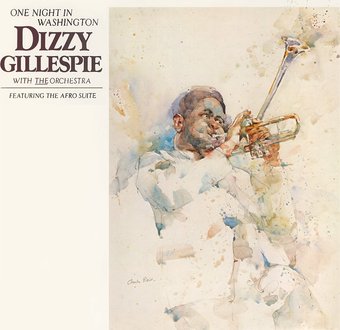 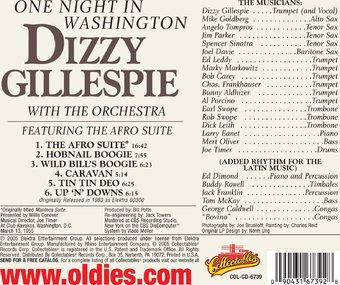 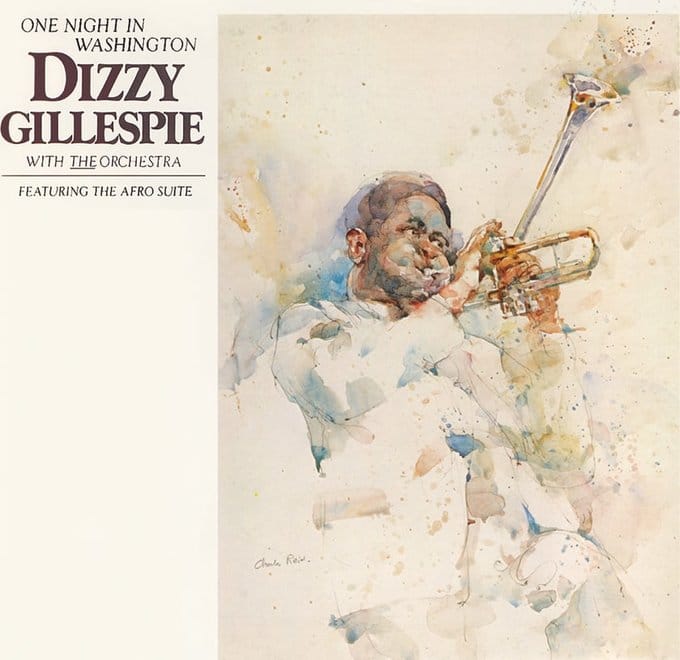 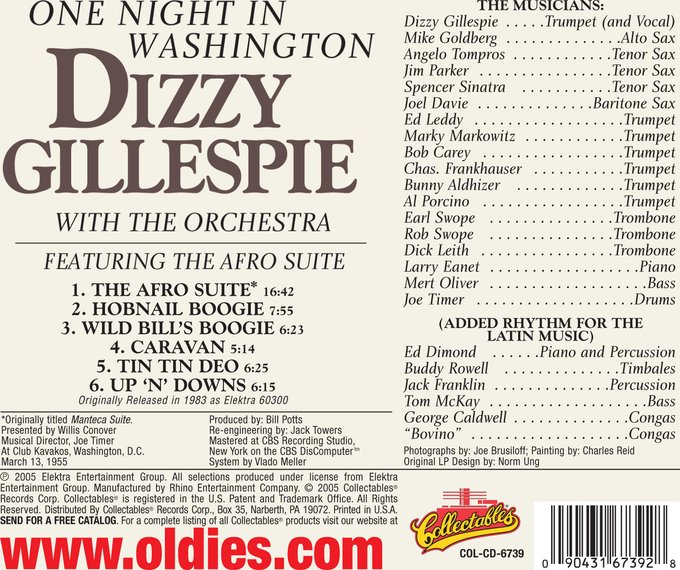 Originally released by Elektra in 1983, this magnificent concert caught on tape is a fine example of the trumpet mastery that Dizzy Gillespie possessed. Backed by a local Washington D.C. orchestra that is more than complimentary to the jazz legend, Gillespie shines in both his trumpet soloing and vocals. This is a true live gem of one of the great jazz trumpeters of all time.

Personnel: Dizzy Gillespie (vocals, trumpet); Dizzy Gillespie; Mike Goldberg (alto saxophone); Joel Davie (tenor saxophone, baritone saxophone); Jim Parker (tenor saxophone); Charles Frankhauser, Bob Carey (trumpet); Ed Dimond (piano, percussion); Mert Oliver (double bass); George Caldwell, Tom McKay (congas); Angelo Tompros, Spencer Sinatra (tenor saxophone); Al Porcino, Marky Markowitz, Ed Leddy, Bunny Aldhizer (trumpet); Earl Swope, Rob Swope, Dick Leith (trombone); Larry Eanet (piano); Joe Timer (drums).
Liner Note Authors: Mort Goode; Bill Potts.
Recording information: Club Washington, Washington DC (03/13/1955).
Author: Dizzy Gillespie.
Dizzy Gillespie was recruited as a special guest to perform on March 13, 1955, in concert with the Orchestra (a Washington, D.C., big band), a date that was recorded by Bill Potts and not initially released until 1983 by Elektra Musician. Although there was only a brief rehearsal of Gillespie with the band prior to their performance of the trumpeter's "The Afro Suite" (which includes "Manteca" plus a trio of pieces written in collaboration with Chico O'Farrill), they provide excellent support for this extended work, which features the composer extensively. Two pieces from the vast repertoire of Count Basie, "Hobnail Boogie" and "Wild Bill's Boogie," are enjoyable, though pianist Larry Eanet suffers from an inadequate microphone setup. Ed Dimond takes over the keyboard for an explosive Latin-flavored romp through "Caravan," though Gillespie obviously steals the show. The rather reserved small group rendition of "Tin Tin Deo" is curious but still of interest. The closer is bassist Tom McKay's swinging riff tune "Up 'N' Downs," which sounds like it could have easily been a part of Basie's songbook. One oddity about the concert is that Charlie Parker had died during the previous night, but this was not known to the musicians as his passing had not yet been announced. One of the more obscure recordings by Dizzy Gillespie, One Night in Washington is well worth acquiring. ~ Ken Dryden

75%off
Dizzy Gillespie
Live in Montreal
$4.98 on Sale
Add to Cart

73%off
Movie Music Man: A Portrait of Lalo Schifrin
$3.98 on Sale
Add to Cart