When a young Scottish boy is kidnapped in an attempt by his uncle to steal his inheritance, he is sold into slavery. From the director of the Bowery Boys movie series, William Beaudine. 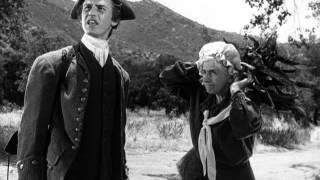 Based on the classic story by Robert Louis Stevenson, this film combines action and adventure in an old world setting. When a young Scottish boy (Roddy McDowall) is kidnapped in an attempt by his uncle to steal his inheritance, he is sold into slavery. From the director of the Bowery Boys movie series, William Beaudine.

For his first independent production, former child star Roddy McDowall selected the tried-and-true Robert Louis Stevenson classic KIDNAPPED. McDowall reserves the plum role of David Balfour for himself, while Dan O'Herlihy, McDowall's costar in Orson Welles' MACBETH, is cast as Scottish patriot Alan Breck. The story is the familiar one about a young man (McDowall) cheated out of his birthright by his wicked, covetous uncle (Houseley Stevenson). Kidnapped and sold into slavery, Balfour escapes and makes his way back to Scotland, where he befriends the swashbuckling Breck and the lovely Aileen (Sue England). Several exciting adventures later, Balfour returns to his ancestral home to settle accounts with his uncle. Laid low by threadbare production values, KIDNAPPED is one of lesser screen adaptations of Robert Louis Stevenson's novel, though at least it's more faithful to the source than the 1938 20th Century-Fox version.

Adventure | Slavery | Kidnapping | Adventurers
This product is made-on-demand by the manufacturer using DVD-R recordable media. Almost all DVD players can play DVD-Rs (except for some older models made before 2000) - please consult your owner's manual for formats compatible with your player. These DVD-Rs may not play on all computers or DVD player/recorders. To address this, the manufacturer recommends viewing this product on a DVD player that does not have recording capability.