Life has its ways of teaching 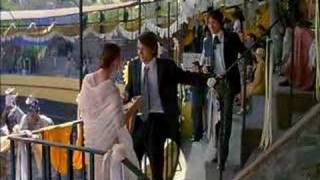 This beautifully filmed, expertly acted movie about two 17-year-old, middle-class Mexican boys on summer break is deceivingly complex. The basic plot of the film is that best friends Tenoch (Diego Luna, BEFORE NIGHT FALLS) and Julio (Gael Garcia Bernal, AMORES PERROS), who think of nothing but sex, convince a beautiful 28-year-old woman, Luisa (Maribel Verdu), to go on a road trip with them to a nonexistent beach. They get lost. They flirt and giggle and fawn over Luisa hoping to win her over with their boyish charms. And that's about it. But that simple plotline merely provides structure for the poetry and meaning that is woven into the film with photography and narration. Periodically throughout the film, while the action continues normally, the sound stops. A voice over then gives information--sometimes a brief biography of one of the characters (birth date, name of father and mother, consequences of birth, primary childhood experiences), or a note about what each of the characters is really thinking, or a news report or historical comment that brings Mexico's tangled politics into the context of daily life. Never is the voice connected to a character in the film. It simply floats. Meanwhile, underwater photography, roving shots of the Mexican countryside, and affectionate close-ups on the characters communicate a solemnness that is not present in the plot. All of these pieces fit together easily, resulting in an excellent, whole, thoughtful film.

Sexual Chronicles of a French Family
$23.50
Add to Cart